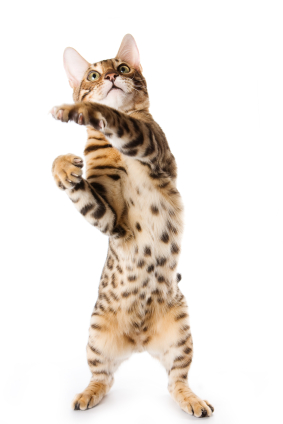 Cryptorchid cat or monorchid cat? When a male kitten receives his first physical examination, it isn’t uncommon for the veterinarian to find only one testicle. The medical term for having one testicle is monorchid. But a true monorchid cat is rare. The kitten more likely has two testicles, but one of them is in the wrong place.

As a male kitten develops inside his mother’s womb, his testicles are initially formed high in his abdomen, just under the kidneys where the ovaries in a female kitten are located. While the fetus grows, the testicles begin to “migrate” through the abdomen, eventually moving through the abdominal wall and into the scrotum shortly before or after birth.

Occasionally, one of the testicles becomes “lost” along the way, and only one testicle makes it to the scrotum. A better word for this condition is cryptorchid, meaning “hidden testicle”.

The cryptorchid kitten presents a dilemma when it comes time for neutering. Although some kittens may eventually “drop” the second testicle into the scrotum as they approach puberty, many don’t. The hidden testicle should be removed as well as the apparent one, for it’s highly disposed ….in its abnormal state…to eventually become cancerous.

And although the abnormal testicle is highly unlikely to produce normal sperm and allow the cat to sire a litter, the testicle can still produce significant amounts of testosterone. The result of removing only the normal testicle is an apparently neutered cat who acts like a tom in many ways. He’ll probably still want to roam and fight and will still stink up his home and territory with odoriferous tomcat urine.

Occasionally, a newly-owned and presumably neutered male cat is presented to the veterinarian or behaviorist for exhibiting tomcat behaviors, when in fact he is a cryptorchid cat who has had only one of his two testicles removed. Cryptorchism in cats is in effect…half a tom.

His physical appearance often gives him away, however, with thick skin and characteristic “tomcat jowls” and a decidedly masculine cat frame. A simple blood assay will reveal the testosterone level to be higher than that of a neutered male feline. Exploratory surgery may then be scheduled to locate and remove the hidden testicle.