FeLV or FIV ...which one is it? Both are retroviruses... 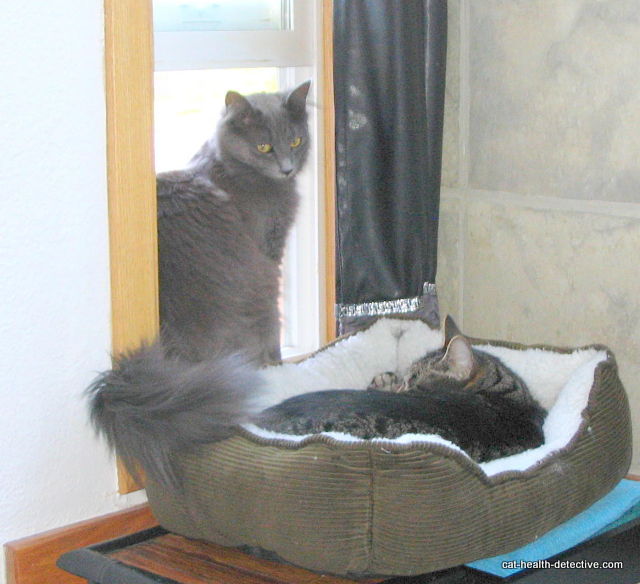 FeLV & FIV--Retroviruses contain an enzyme called reverse transcriptase that converts viral RNA into a proviral DNA copy that becomes integrated into an infected individual's DNA. These integrated proviruses are duplicated with normal cellular genes with each cell division. Thus, all offspring of the originally infected cell will contain the retroviral DNA. In addition, mulitple copies of the infectious virus may be produced causing other cells to become infected.

Feline Leukemia Virus falls into the oncornavirus subfamily, a group of organisms causing immunodeficiency diseases and neoplasla or cancer. FeLV specifically attacks members of the cat family...domestic breeds and some exotic species.

Feline leukemia virus is spread from an infected cat primarily through salivary secretions, although it can be spread by feces and urine, and even fleas. An infected mother can transfer the virus across the placenta and through the milk to her kittens and also through grooming her kittens.

Feline leukemia virus invades a susceptible cat via the tonsils and lymph nodes of the head and neck. Two to twelve weeks after initial exposure, the virus arrives at the bloodstream and other areas of the body such as the bone marrow and the intestines. Eventually, if its not stopped by the immune system, the virus invades the salivary glands, stomach and esophagus, tear ducts, respiratory tract and bladder.

Three things can happen when a vulnerable cat is exposed to FeLV.

In other cases, however, an infected cat's body will mount only a partial immunity. The cat will appear normal and may even test negative on the commonly used feline leukemia virus test, but the cat's body hides little pockets of virus. If this cat is severely stressed by any number of circumstances, it may develop a persistent infection with FeLV showing the clinical signs of the disease and testing positive on lab tests.

In some transient infections, the cat's immune system destroys the invading virus, rendering the cat immune to future disease associated with feline leukemia virus. However, in persistent infections, an infected cat's immune system doesn't get the job done of destroying or controlling virus multiplication, and the infection spreads throughout the cat's body, rendering him susceptible to various feline leukemia virus associated diseases.

There are clinical signs. Cats persistently infected with FeLV shed virus in their saliva and other bodily secretions, serving as a source of virus for other cats, and will remain infectious for the rest of their lives. Cats transiently infected may shed virus for a few days to several months after initial exposure.

Feline immunodeficiency virus is spread primarily through saliva, and the main mode is through bites. Pet cats running free and feral cats, mainly males, are the most likely to become infected. Because FIV generally incubates 3-4 years before signs develop, most cases occur in cats 5 years of age or older.

When a susceptible cat is exposed to FIV, the virus travels to lymph nodes where replication occurs in immune cells called macrophages and a major subset of T-lymphocytes known as helper cells. Because helper T cells are critical to proper immune functioning, their loss leaves a cat vulnerable to opportunistic infections.

The incubation time...the time from initial infection to development of clinical signs...for FIV can vary from months to years. The vast majority of cats positive for FIV remain infected for the remainder of their lives, and they are a potential source of virus for other cats.

Cats persistently infected with FeLV are susceptible to diseases that are directly or indirectly caused by the virus. Those directly caused by FeLV include leukemia, cancer of the lymphatics, bone marrow abnormalities (low white blood cell, red blood cell, or platelet counts), kidney disease, and reproductive disorders. Kittens can fail to thrive and often die.

Feline leukemia virus lowers a cat's ability to mount an immune response so it also becomes susceptible to secondary infection with many other diseases which all have their own clinical signs. It is this impairment of the immune system's ability to protect the body from opportunistic invaders that makes feline infection with FIV so devastating to cats harboring these viruses.

As mentioned earlier, signs suggestive of FIV may not appear until months or years after initial introduction of the virus. The first stages of infection are often characterized by enlargement of lymph nodes throughout the body, fever, and a drop in white blood cells which may go undetected by owners. Later, oftentimes much later, diverse clinical signs associated with secondary infections appear.

A decreased and poor appetite, poor hair coat, along with inflammation of the gums and mouth, are often the first outward signs of a problem. Chronic, non-responsive infections of the skin and intestinal, respiratory, urinary and reproductive tracts may follow. Some cats infected with FIV show neurological
signs such as seizure or experience ocular disease like glaucoma. To make matters worse, cats infected with FIV are more likely to be infected with FeLV, feline infectious peritonitis (FIP), and the parasites Toxoplasma and Hemobartonella.

Diagnosing and distinguishing between an immunosuppressed cat suffering from FeLV and FIV based upon clinical signs is virtually impossible. However, the history and vital statistics may offer clues. A middle-aged, free-roaming male is the likeliest candidate for FIV because of his probability of having bite wounds.

The most accurate diagnostic is lab testing called ELISA (enzyme-linked immunsorbant assay). It detects FeLV antigen (viral protein) in blood, tears, or saliva. The IFA (immunoflorescence assay) confirms the presence of FeLV antigen in white blood cells and platelets. Because these are tests for antigen, they can be performed on any age cat, including young kittens.

Tests available for diagnosing FIV are the ELISA, Western Blot and IFA. These test detect antibodies to FIV antigen. Because mothers can passively transfer maternal antibody which interferes with test results to their young kittens, kittens should be tested or retested after they reach 6 months of age.

The outlook concerning FeLV is much more optimistic today than in the past 10 years. Testing and vaccinations have resulted in a drastic drop in the number of cases. Many shelters test kittens and cats and only release those negative for feline leukemia virus. Therapies vary with each case found. Tumors might be treated with chemotherapy, surgery or radiation; diarrhea and kidney disease with fluids and symptomatic therapy; anemia with blood transfusions. Regardless of the treatment selected...there is no direct cure for it. Many of the cats with persistent infections will succumb within 2-3 years.

FIV-positive healthy cats may live for months or years. Opportunistic infections play an important role in FIV related illness. Supportive therapy such as intravenous fluids and nutritional supplements are indicated for most but there is no cure. Typically they will succumb 4-6 years after the initial infection.

A diagnosis of FelV or FIV need not be a death sentence. However, be sure to observe certain precautions. Closely monitor positive-testing cats for health problems and have the problems aggressively treated when they are detected. Some vets encourage antibiotics for minor cuts just to be safe. These cats should be kept indoors and isolated from other felines to prevent the spread of
infection.