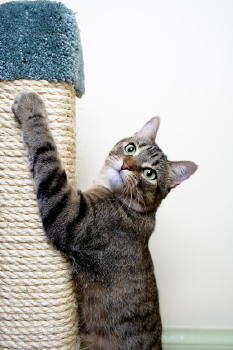 Cat behavior is oftentimes amusing such as the antics with Catnip. A while back I noticed that Max Factor (one of my cats) was perched on a windowsill exhibiting cat balance, in the guest bathroom which has a great view of trees and active birds. A few hours later I noticed that Coty had taken that spot. Ordinarily, I wouldn't give these events much thought, but then I began to wonder what was going on when I saw this pattern repeat itself day after day. It was almost like they had a time-share arrangement going on in regards to that prime windowsill.

Taking turns with favorite spots is something all cats do. The cat behavior of sharing certain areas in the home is just a scaled-down version of what happens in the wild. Although cats in the wild will defend the narrow boundaries of their core territory, their larger home range...where they explore and hunt...usually overlaps the home ranges of other cats. So, neighboring felines must take turns using specific hunting and napping spots within their "common ground".

They avoid confrontations by announcing their presence with markings of urine and feces. When a cat enters a shared home range and comes upon a recent "marking" from its neighbor, the newcomer will usually depart and come back later. Over time, each cat may fall into a routine of visiting a shared area at a time when other cats are absent.

It's not clear how house cats establish their cat time-share arrangements. Fortunately, they don't usually leave "markings" but several factors probably come into play. Some shared spots offer different advantages at different times of day, so cats may take turns with the space according to their needs.

A cat that's an avid bird watcher like Max, may commandeer a particular window in the morning when the birds are most active...while Coty, a sun-worshiping cat may take over the spot during the bright afternoon. In this scenario, each cat voluntarily relinquishes the space once its own "special time" has passed. Also see Cat Internal Clock

But cat time-sharing isn't always so egalitarian. One cat behavior is that a dominant personality may displace subordinate feline housemates whenever it wants a spot. The dominant cat has all the inalienable rights; the others get what's left over. Nevertheless, such displacement is usually a peaceful process. Dominant cats can afford to be non-aggressive because they know they can have anything they want.

A study of cat time-sharing in a house of 14 neutered cats found that for this cat behavior, cats seem to choose their time-shared spots according to which other cats go there. It was noted that certain cats weren't sharing a preference for a spot because it had sun, a view of birds or height...it looked more like specific individuals time-sharing together...and the groupings were primarily by gender.

Such gender groups make sense when you consider the cat behavior social systems of cats in the wild. Lionesses and female feral cats will band together to raise kittens, and "brotherhoods" of male lions, cheetahs, and feral cats will sometimes defend a common territory. But male and female cats usually don't spend time together unless they are mating. The only enduring inter-gender relationship seems to be between a mother cat and her male kittens.

Because the Kent State study was restricted to one house, we can't say whether "all boy" and "all girl" cat time-sharing teams occur in every multicat situation. I have found in observing my (at that time five cats), that they follow a close pattern. Revlon and L'Oreal Blaze trade off frequently and they are both female sisters.

Max Factor (male)and Coty (female) trade but only when it suits Max, because he is dominant. Coty and Chanel#5 trade for a spot on the sofa, each with their reasons. Coty likes TV in the evening and Chanel#5 likes the quiet spot in the daytime. They are both females.