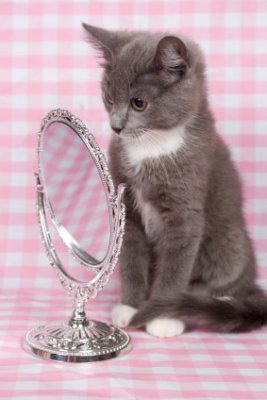 Needless to say, cat sexual behavior varies between males and females. The normal age for onset of sexual maturity in female cats is 6 to 9 months of age, but some cats begin as early as 4 or 5 months which can surprise their owners. In most parts of the USA, the typical “breeding season” of cats lasts from late January or February through September.

In very temperate areas of the Southeast (southern Texas, Louisiana, and Florida), the feline breeding season may be year-round. An unsprayed female cat is known as a “queen,” and she will come into estrus (heat) and be eager to breed for 5 to 10 days, depending on her age and the month of the year. After another 1 to 2 weeks, if she hasn’t mated and the season isn’t over, she’ll come into heat again. Cats can have several estrus cycles within the breeding season, and therefore are considered to be “seasonally polyestrous”.

Cat sexual behavior in a female cat in heat is unabashed. She generally calls loudly and continuously for a mate. She will rub and roll against other cats, people, and inanimate objects, and may sometimes mark then with a spray of urine. She will typically assume a posture called lordosis, in which she crouches down on her forequarters, raises her hid end into the air, and hold her tail aside. She is particularly likely to assume this position if she is scratched above her tail. Unlike female dogs, cats do not normally have a blood-tinged discharge during estrus.

Cat sexual behavior in males is different. They don’t exhibit such a distinctive display of sexual readiness but their behavior can be equally perplexing. Tomcats are legendary for their late-night fighting and caterwauling and for spraying their territories with strong-smelling urine. This is more noxious than the urine of a neutered male cat, thought to be due to a testosterone-stimulated, sulfur-containing amino acid called felinine, which enters the urine through the kidneys.

A male kitten who has been previously submissive to other cats in the house may begin to challenge his place in the feline family as he become sexually mature; he may even attempt to dominate human household members. His owners, often unaware of the cause of his behavior, may be puzzled by the sudden change in his demeanor.

The sad fact is that millions of homeless cats are euthanized annually and millions more roam the streets trying to survive. So it’s important that your cat not be responsible for the birth of another unplanned litter. You could simply enforce your cat’s abstinence by keeping him safely confined, without access to intact cats of the opposite sex. But this tactic will not prevent the cat sexual behavior of spraying, howling, yowling, and all of the other behaviors that will cause a racket and smell.

A better solution is surgical sterilization, spay or neuter surgery. Not only will this routine procedure favorably affect your cat’s behavior, but it will also safeguard your cat’s health. Spay surgery, also known as an ovariohysterectomy (OHE) because it involves the complete removal of the ovaries and the uterus, also eliminates the possibility that a female cat will ever have a severe uterine infection (called pyometra). Because the ovaries are entirely removed during the procedure, ovarian cancer is also prevented.

Despite the tradition of spaying female cats after they’ve reached puberty, over the past several decades, veterinarians have begun to perform spays on cats beginning at 7 weeks of age. With modern anesthetics and advanced surgical techniques, prepubescent sterilization can be accomplished safely before a young female cat ever has her first estrus cycle.

Neuter surgery of male cats consists of the complete removal of both testicles, eliminating the possibility of testicular cancer. Although testicular cancer is reportedly rare in male cats, it is surmised that this rarity is because an un-neutered male cat rarely lives long enough to develop the cancer. The days of roaming and fighting that comprise the life of an average tomcat are often shortened by bite wound infections, collisions with cars, and the fatal effects of feline immunodeficiency virus (FIV)…a fatal disease most often transmitted among fighting males.

Once you’ve had your cat altered, you don’t expect the cat sexual behavior to involve sexual escapades but there are some neutered cats that decide a towel, socks or another soft item like a bathmat should be the object of their ardor and you will see them moving rhythmically against the item. Masturbatory behavior in cats is not common but it sometimes happens.

Although female cats may also exhibit the behavior, it appears to be more common in males. Most people are somewhat inhibited and find this behavior embarrassing but Dr. Nicholas Dodman , DVM, wrote a book in 1997 called “The Cat Who Cried for Help” and tells the stories of how some of these behaviors were resolved such as getting a new companion so a cat isn’t alone all the time, getting toys and videos, walking the cat on a leash.

Many of the causes of this compulsive behavior are boredom or stress. For example, my cat Max Factor periodically grooms his genital region when he’s stressed so he frequently has no hair there. In the past, when he first arrived at our door as a neutered abandoned stray, he suffered from psychogenic alopecia which is a disorder whereby a cat grooms himself until the hair falls out because of stress. This action has disappeared and he has a good, full coat of hair now with the exception of periodically over grooming his genital region.

While we may wish that cat sexual behavior wasn’t so noticeable, we must accept that they are living beings, with hormones, reproductive instincts and feelings much like those we have. Understanding cat sexual behavior may not diminish your embarrassment when they demonstrate these behaviors when you have guests in your home but perhaps this article will help you understand that those behaviors are normal.