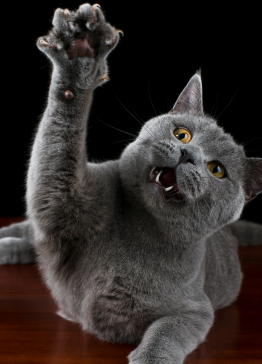 Cat behavior problems are varied and despite the aloof disposition of cats, they can be social animals. Cats use a bunch of cat talk communication skills to maintain harmony. When your cat flattens its ears and hisses, it is sending a "don't mess with me" message. When your cat rubs its body along your leg as you get its meal or purrs contentedly in your lap, it is sending a friendly message.

The language of cats has evolved to meet cats' needs as territorial animals. Cats have learned to communicate to avoid physical contact during territorial disputes and to lessen the chance of serious injury if combat does happen.

Cat talk has a wide range of sounds but they are generally silent in the wild except when mating, signaling to kittens, or threatening an adversary. Some domestic cats have a plaintive howl when they are a grieving cat feeling the loss of another cat in the household.

Cats have a more highly developed sense of smell than us and often use scents to exchange messages with other cats. By "scent marking" prominent objects in its territory, a cat is posting "No Trespassing" signs. Again, this is cat talk. Experts believe cats use scent to announce their gender, readiness to mate, and possibly fear or anxiety. See cat spraying

Aside from cat behavior problems, a cat has several ways of leaving its scent and this is a normal action. When your cat greets you by rubbing its forehead against your leg or pauses to brush its chin against a door frame, its leaving scent with the parts of its body best equipped to do so. Scent glands are heavily concentrated on each side of the cat's head between the eye and the ear, on the upper lip, on the chin, and at the base of the tail.

Cats scent mark you as a sign of a friendly greeting. Domestic cats that live together may lightly brush against each other as they pass in the hall, transferring scent and showing a friendly sign. The scents that cats deposit with head and chin rubs are a cat behavior clearly noticed by other cats but they are imperceptible to people and are not cat behavior problems. That's why people usually interpret this rubbing as a sign of affection which is frequently also true. See multi-cat households

Sometimes cat behavior problems are communication patterns that are inappropriate in the home. Cats mark their home range by spraying urine on prominent objects, particularly at locations where cats' paths cross and along the outer perimeter of what they think is their territory.

Studies suggest that urine scent...or at least the characteristics of the scent that are important to the cat...fades within 1-3 days. So a territorial male will patrol its territory and freshen its urine marks about once every 24 hours. See cat urine remover

This urine spraying form of feline communication, although appropriate from the cat's point of view, is unwelcome in the home. Once urine marking begins, a cat can very quickly fall into the habit of refreshing its mark on a sofa or drapes daily. This often leads to owner frustration where the cat ends up at a shelter.

In these instances the shelter lets potential owners know that the cat has to be in a one cat household. I admit I have been sorely tempted to take my cat Max there because he is a habitual "hard core" case but over time I've found a few products that help with odor elimination that I will mention later. Also see Cat Diapers which may be more a senior cat issue than just a behavioral one.

Fortunately, you can prevent urine marking in most cases by neutering male cats before they reach sexual maturity. Neutering an adult cat that already marks also usually works to stop this cat behavior problem but some like Max will just continue. Owners may seek the assistance of a veterinarian or animal behaviorist to change their cat's behavior. 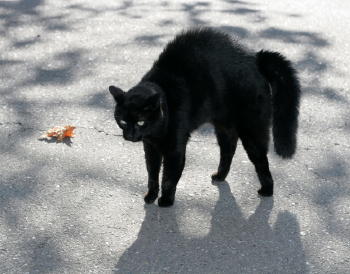 Cat behavior problems like a cat scratching a prominent object, where it leaves visible claw marks and its scent deposit from glands in its paw pads are fairly common. Scents and visible markings allow "cat talk" without face to face contact.

Cats also use their bodies to talk to their owners. You can look at a cat and tell if it is aggressive toward you or friendly, whether it is dominant toward you or a 'scaredy cat' acting defensively. However, some cats scratch excessively and have led owners to consider declawing cats

Body language conveys cat-to-cat messages at close range. Cat behavior problems are sometimes a normal cat expression, such as a defensive posture with flattened ears, crouching body and exposed teeth...it is saying it doesn't want to fight but it will if anyone moves closer. A cat showing an offensive posture typically stands straight up, with ears erect and angled to the sides and whiskers pointing forward, as it attempts to stare down its adversary with slit-like pupils.

A cat showing a defensive threat posture crouches or leans back from its opponent with its ears flattened against its head, whiskers pointing backward, and widely dilated eyes...it waits for an opportunity to flee...or fight if it must. Some cats develop a nervous habit of over grooming to the point of cat hair loss.

Another type of feline threat display is the usual "Halloween cat" posture. The cat stands sideways with its fur erect and its back in a high arch. This body posture, along with hissing and spitting, is usually showing other species to "back off". It is making itself look as large and formidable as possible. As I've mentioned before, my cat Blaze does this so well she looks like a raccoon.

The life of a domestic cat is similar to us being their mother. Of course the standard friendly posture is the tail sticking straight up in the air as it approaches you. Throughout a cat's life, you, the owner...whether a man or a woman...fulfill many of the same functions the cat's mother once did.

They lie on our laps and these kneady felines knead our legs with their front paws just as they once did while nursing and they depend on us for food and shelter. Being a cat's "parent" is special and amusing when they "cat talk" to us.

Never attempt to pick up your cat when it's showing aggressive signs. The cat is warning everyone, including you, that it will attack if approached. I have a pair of large mitts, similar to elbow length oven mitts, that are soft and plush that I use when needed to calm down one of my cats.

However, cat behavior problems are also if your cats are fighting each other, so separate them if you can, gently, with a broom between them and try to herd one of them into another room. See Cat Aggression. I use Feliway diffusers that heat an oil that has properties that are calming to cats.

These are just some very simplified and general guidelines on the personality makeup and cat behavior problems (or lack )of a few popular breeds.