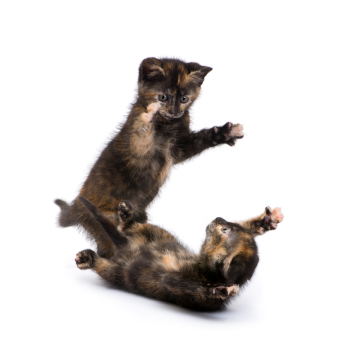 The grieving cat is heart wrenching to watch but you can give your cat sympathy and extra loving care to ease the sadness. You watched your cats nap together, play together, wash each others faces and even have the occasional fight.

Although you're delighted in their close bond, you also get a twinge of sadness knowing that one of these two feline best buddies is bound to pass away before the other one. While you deal with the loss of a beloved pet yourself...you can't forget that the surviving cat is a grieving cat.

The tears stream down my face as I remember the plaintive howling in the middle of the night as one of my cats expressed its grief over the loss of a buddy. I know that my two torties that are litter-mates and best buddies will also deal with a loss they don't understand.

From experience, I know that one cat will not simply go on as if nothing has happened. It is best to be prepared so that when the upset comes, you can help the survivor adjust.

For years, philosophers and scientists have debated whether animals feel grief and other emotions. Most people who live with cats recognize they have emotions. Cat owners can attest that felines possess a wide range of emotions, including: the rusty-gate purr of happiness; a lashing tail showing annoyance; and the sudden grooming hiding embarrassment. It should be no surprise that some cats seem grief-stricken after the death of a feline or human companion.

Of course it's hard to know what cats think death means. Cats probably don't understand death. After all, many terminally ill pets and people die outside the home in a medical facility. A cat knows only that its companion has disappeared. So whether cats understand what has happened or not, they know that things have changed and there is a void. Also, an owner's depression over the loss of a beloved pet may add to a cat's confusion and distress. 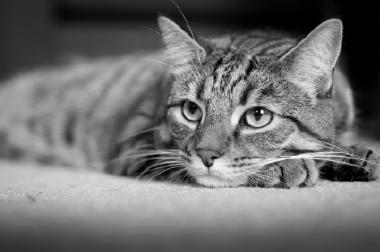 Signs of a grieving cat

Learn the signs to look for. A grieving cat will show all the signs of depression that you would expect in a person. They don't just stop eating ...they also have sleep disturbances and a lack of interest in things ...they may just sit and stare. There are no large studies of a grieving cat but a small survey of 160 households in which a pet had died, conducted by the ASPCA, found on average, cats ate less, slept more, and become more vocal after the death of a cat companion.

As the different survey responses suggest, not every cat that loses a feline housemate will grieve. Some owners get upset because they come home after the trauma of losing one of their cats, and they find the cat at home is just the happiest cat in the world because it has the whole place to itself. So, there is really no way to predict which cats will grieve.

When cats are closely bonded, they are probably more likely to become upset if one dies. But even cats that frequently quarrel may lament the loss of their feuding partner. As with people, some animals seem to have an inherited predisposition for depression and grief.

When one of your cat's companions dies or disappears, be alert to changes in your cat's eating habits. A cat that goes off its food is at risk for hepatic lipidosis ...a potentially deadly liver disease. Grief-induced anorexia (lack of appetite) is not uncommon. If your cat cuts down on her food intake, you must encourage her to eat.

But don't change diets in an attempt to titillate her taste buds. A new food may upset your cat's digestion. Instead, try spending more time with your feline friend. Sometimes an owner's presence and encouraging words will motivate a reluctant eater. Also, warm the food slightly and add a little water or meat juice.

Beyond just encouraging your cat to eat, you should try to engage her in pleasurable activities such as petting and play. Granted, you may not feel much like playing because of your own grief in losing a pet, but doing so may help both you and your grieving cat to come to terms with the loss. Also, stick to a routine. Don't make too many changes or alterations to schedules.

It is also recommended that you don't get another cat right away. A new cat may take your cat's mind off her missing companion, but the newcomer will also be a source of stress. Stress is something your grieving cat can do without...and most owners need time before they feel ready to adopt another cat.

If your cat continues to act depressed for weeks or stops eating for more than 3 days, consult your veterinarian. Your pet may benefit from treatment with antidepressant drugs, or she may need to be force fed to restore her appetite. In most cases such intervention isn't needed. According to the ASPCA survey, almost all pets that lost a companion were behaving normally within 1 to 6 months. The loss diminishes over time.