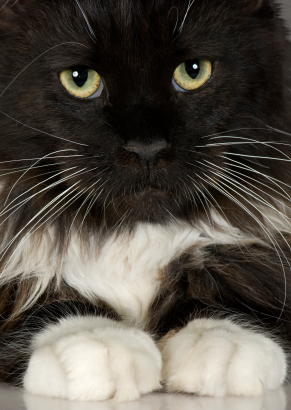 Kneady felines ....can you think of things in the world more endearing than a sleepy...or alert cat...purring and kneading you with cat paws. Your cat is actually performing the actions that it did with its mother...now it's you. As heartwarming as it is this behavior can get out of hand. Some excessively kneady felines pummel their owners at every opportunity...often drooling in the process. This habit becomes especially annoying when it leaves little claw marks and saliva trails on your clothes or wakes you up.

Yes, it can be annoying...but can you really resist a cat that thinks you're "mom"? Kneady felines are doing a reenactment of the cat paw motions kittens use to stimulate their mother's milk flow while nursing. The link to the nursing cat behavior is further evidenced by the actions of cats that move their lips, drool, or nuzzle you..the owner..or your clothing while they perform the action.

You, the human are playing a maternal role in the cat's life. You provide food, and you pet the cat...which is the equivalent of maternal grooming.

Kneady felines behavior in adult cats may have its roots in feline genetics...and for ages humans have selected and bred cats that adjusted well to home environments. These cats have tended to be more docile and playful than their wild progenitors. Domestication seems to select for retention of juvenile characteristics and this may be why some pet cats continue to act like kittens in adulthood.

However, why do some cats knead at the drop of a hat...when others don't. Early weaning may be the answer. Kittens separated from their mothers before they've been completely weaned seem to have a greater tendency to perform excessive kneading later in life. In nature the mother cat starts to repel her kittens as part of the normal weaning process but humans maintain the maternal role because they pet and feed their cats into adulthood.

If you have such a kneady feline, it won't be easy to stop this behavior. Kneading brings its own rewards by stimulating the pleasure centers of the brain. Even if you stop petting your cat while he kneads, he will continue to enjoy himself.

To get your cat to stop, you'll have to actively deter him. Start by gently pushing your cat away whenever he begins to knead. If this doesn't work, try using some small noisemaker. If you are trying to discourage a cat who kneads in bed, you are probably better off just shutting him out of the room at night rather than disturb others in the household with a noisemaker.

I find the behavior is most prevalent in two out of my six cats. I usually have a small towel handy to place on my lap so when Max is drooling as he kneads, the towel takes care of it. Coty only does it when we have blue jeans on...for some crazy reason...and she doesn't drool. So, I haven't attempted to stop them because it doesn't bother me.