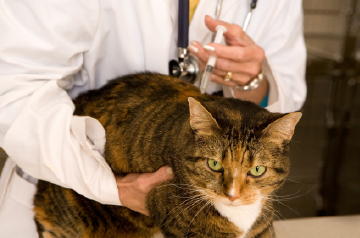 Psychoactive drug therapy, or cat behavior medications, are treatments that should be discussed in depth with your veterinarian because you want to know if you are helping or hurting your cat. Usually vets resort to this method only when behavior modifications (retraining) fails to defeat a problem.

Owners give up after a few weeks if they don't see an improvement so the quick change you see with drug therapy gives owners encouragement to stay the course. However, all vets agree that drugs are not the answer to every behavioral problem.

Owners need to decide for themselves what behaviors they believe to be problems so they can review the cat behavior medications for specific issues. House-soiling, scratching, yelling, biting, or territory marking are some examples. Illness may be changing your cat's normal actions and your vet can often identify and treat the disease before it becomes serious.

If a medical issue isn't the cause you should look to your cat's home life...what changes have happened...like another cat being brought into the house etc. There are some anxiety issues that may be deep seated and I'll list a few here.

Disruptions to a cat's life, or any change in routine, can make them fearful or anxious because they are such creatures of habit. Even the addition of a new piece of furniture can cause anxiety or aggression in some cats. It may urinate outside its litter box, over-groom or become aggressive with other animals or humans. These are "displacement behaviors". There are different cat behavior medications that can help bring the fear and anxiety under control.

Ketamine is the most popular but is falling out of favor due to the number of animals that have an allergic reaction or other reaction to it. Diazepam is growing in popularity and is typically used for aggression and/or anxiety.  It generally causes lethargy and/or drowsiness which are oftentimes the results being sought.

If your cat is suffering from chronic anxiety lasting several weeks, antidepressant drugs such as amitripryline (Elavil) or imipramine (Tofranil) may be effective. Serotonergic drugs such as buspirone (BuSpar), clomipramine (Anafranil), and fluoxetine (Prozac) are fairly effective for a therapy lasting over three weeks. These drugs gradually increase the brain's supply of serotonin, a chemical that carries messages across the gaps between nerve cells.

Scientists believe that a shortage of serotonin leads to depression and anxiety in humans and animals. These cat behavior medications have few side effects and don't lead to drug dependence but it can take a few days or weeks to reach full effectiveness.

Cats suffering from acute fear may benefit more from quick-acting benzodiazepines such as alprazoalam (Xanax) or diazepam (Valium). These cat behavior medications act quickly to repress some functions of the nervous system and usually have a fast calming effect. They aren't suitable for prolonged use because they can cause lethargy, lack of coordination and increased appetite. Also, in a few rare instances, cats have died from sudden liver failure after receiving diazepam.

My cat, Chanel#5, is a scaredy cat. She spent some time hiding under our shed (we don't know how long) and we only became aware of her when Max coaxed her out. She was 6 months old and only 2 1/4 pounds because life had been so hard for her. We got her to the vet, fed her, spent time keeping her separated from the other cats so she could lose some very feral behaviors, but although she loves to sit on our laps and get petted....if the Post Lady comes to the door she goes flying into hiding and she's now four years old. I haven't had her put on any cat behavior medications because she recovers from her fright in a reasonable amount of time. Coty steps in to defend her if there is an issue with one of the other cats and no one messes with our little shrimp Coty.

Also, we have Feliway plugged into a wall outlet for calming the cats and it is pretty effective.  It helps Chanel with her fear and helps Max not to be as territorial.

I have one cat, Coty, who gets into the car and stays on the passenger seat looking out the window. The others freak out and want to hide under the seats so they are put in carriers to be transported. When flying, its not unusual for an owner to have their cat tranquilized but.......beware.

A sedated cat runs a higher risk during air travel because it can't regulate its body temperature as well as an un-sedated animal. Drugged cats can suffocate if they fall asleep in an awkward position in their carriers. Because of the dangers the American Veterinary Medical Association recommends against tranquilizing your cat.

Tranquilizing your cat may increase its anxiety. An animal that is frightened but is still aware and alert may be better off than one that feels drugged. The sensation of being drugged may be even more frightening than reality, so cat behavior medications should be considered with caution. If your cat suffers a panic attack at the mere sight of a cat carrier you may want to seek out a cat sitter.

We don't take our cats on planes. If we are flying somewhere we have a wonderful friend who looks in on the cats daily. She is superb and counts heads because there are six. If we didn't have her stopping in, we probably wouldn't get to travel much.