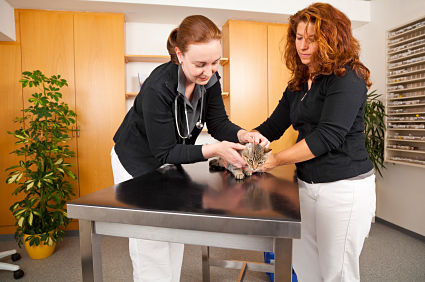 This was done to promote interest in the technique and many veterinarians underwent training in order to add acupuncture treatment to the list of remedies they could offer to cats and other small animals. Hundreds of veterinarians around the world offer feline acupuncture in conjunction with traditional medicine.

There is a legend, dating back over 4000 years, that the Chinese noticed that lame horses recovered during battle when struck by arrows at certain points of their bodies. They were already using acupuncture for humans and they expanded the field to include animals.

Acupuncture therapy is based on the existing acupuncture theory that electrical energy is transmitted through the body via certain channels, similar to the way in which the bloodstream works. If that flow of energy (or "chi")is blocked the result is an imbalance that causes pain, discomfort or disease.

By stimulating certain strategic points on the body, the acupuncturist can unblock the flow of energy thus allowing the body to heal.

What they are saying is that they are moving energy around, that they are not really curing or changing the rate at which things generate...but killing pain and changing this around so the patient has more energy. Feline acupuncture therapy has been extremely successful in treating a number of problems in cats.

Cats with musculoskeletal problems, such as arthritis, often respond exceptionally well to acupuncture. But feline acupuncture has been used successfully to treat many other conditions, including respiratory problems such as feline asthma, gastrointestinal problems, liver disease, and allergies.

Although scientists are still undecided as to exactly how acupuncture works, research shows that acupuncture points are areas of high electrical conductivity. When the points are stimulated for a period of time, it is believed that the energy generated in the stimulated areas is transmitted through sheets of connective tissue, or fascia, which surround the muscles and internal organs. The stimulation is generally sustained for anywhere from 10 seconds to 30 minutes.

A cat, who suffered a spine injury after jumping from a counter, experienced almost miraculous relief after a single acupuncture treatment. The vet used an electro-acupuncture technique, whereby the feline acupuncture needles actually deliver a low current to the afflicted area. Within 12 hours the cat started getting function back, and within a few days the cat was home and active. Usually when there is some type of spinal injury it takes weeks to recover.

Some vets have been trained in both veterinary medicine and feline acupuncture, but when appropriate they also provide the patients with chiropractic, herbal and nutritional therapies. Veterinarians don't necessarily use feline acupuncture as a substitute for conventional medicine, they consider it complementary to it.

Echinacea, for example, is a widely used herbal remedy that stimulates and strengthens the immune system. Of course a good, well balanced diet is always important to keep your cat healthy.

In an example I read about, a 16 year old cat was treated with feline acupuncture when her kidneys were failing and she had developed arthritis and was found to have a tumor of the spleen. With all of her problems, the point was to make her comfortable for the rest of her life.

The vet inserted needles to several strategic locations, and her health began to improve. It seemed to not only make it easier for her to get around but she also seemed to brighten up and had the energy to take a good swat at one of the acupuncture needles.

Veterinarian acupuncturists say that the only sensation the patient feels is that of a tiny pinprick during the insertion of each needle. Once the needles are inserted, acupuncture is not painful. Most cats will tolerate the needles used in feline acupuncture therapy, at least until they begin to feel better.

Cats aren't the best patients. A weak, old kitty will put up with it for a couple of treatments, but after they feel better you have to get out of the way. Dogs are more tolerant of it because they want to please. A cat is not that way. If you cause them any discomfort at all, they become all teeth and claws.

Some veterinarians claim to eliminate even the tiny pinprick sensation. Instead of needles, they use an instrument that sends a laser beam to the acupuncture point. Proponents of the laser technique cite several advantages: it renders the procedure totally painless to the animal; the laser beam is safe to the tissue that it contacts, and there is no possibility of infection since the skin is not broken. The laser procedure is simpler for the vet as well....he does not have to become skilled at needle insertion nor keep an inventory of acupuncture needles.

A single acupuncture treatment on a single cat may require 10 or more needles. Each of these needles can be used only once and must be carefully disposed of. Also, the vet using a laser does not need to exercise quite as much caution against the "teeth and claws" reaction.

Cats do not generally have as volatile a reaction to the laser beam as they do to needle insertion. On the other hand, many dedicated acupuncture practitioners prefer the age-old, tried and true needle method, believing that needles provide greater and more direct stimulation to the acupuncture points.

The length and frequency of treatment depends primarily on the cat's condition. A minor injury such as a muscle strain or sprain often requires only one treatment. A more severe problem such as chronic arthritis may require multiple treatments over a period of months, or even years. Frequently it takes 4-8 visits before the effect is noted.

Most acupuncturists treating chronic problems schedule one or two treatments a week at first, tapering off until only a routine maintenance treatment is necessary which typically would be once or twice a year. The rule of thumb for judging success of the treatment is that by the 3rd or 4th treatment a response is seen. If a response isn’t seen by the 6th treatment, it’s probably not going to help.

A veterinarian is in the best position to diagnose a health problem and determine whether or not acupuncture is a suitable treatment for the problem. It’s important to have a diagnosis. If there’s pain and lameness, you need to know where the lameness is coming from. If its arthritis, you want to treat it with acupuncture but if its bone cancer, you want to treat it in a different way.

Serious illnesses like cancer need to be ruled out before acupuncture is considered as an option. In those situations, diagnosis and treatment through more conventional methods is needed.

Acupuncture treatment can be expensive, typically costing over $100 for an initial consultation including an exam, and between $50 - $100 per treatment. But veterinarians note that the cost doesn’t cover only acupuncture therapy, but also the conventional medical treatment that most animal doctors use in conjunction with acupuncture. Often it’s the cat owner who makes the final decision about the type of treatment a pet will receive.

Cat owners who are well informed about alternative remedies are more likely to seek out acupuncture therapy for their pets, but just as often, it is people who are desperate…nothing else has worked for them. Many people experience acupuncture themselves and know how well it worked on them and so they want to treat their pets with acupuncture.

The opposite is also true…people whose first exposure to acupuncture through their pets often see the positive results and then seek acupuncture help for themselves after an injury.

If your cat has a chronic problem that is not responding well to conventional medication then that’s when you should consider feline acupuncture. When administered properly, acupuncture has relatively few side effects and is generally considered one of the safest forms of medical treatment.

Among the few and infrequently reported side effects are a tendency for an animal to become lethargic after an acupuncture treatment. Other patients seem to worsen immediately after the therapy.

Vets say that these mild side effects simply indicate that physiological changes are occurring, and these changes are often followed by improvements. Feline acupuncture can’t cure your cat of every ailment but it can help with problems such as feline asthma, gastrointestinal problems, skin irritations and arthritis, or spinal disc disorders. Acupuncture therapy is often the answer to musculoskeletal problems also.