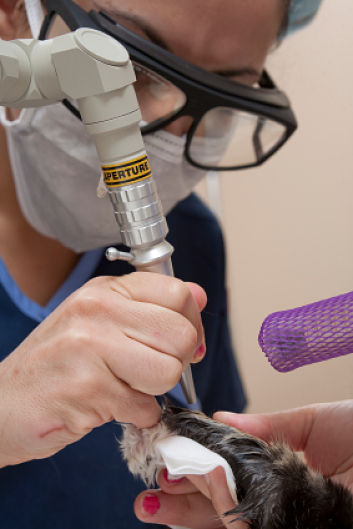 Cat laser surgery was first performed in 1972. At that time these types of surgery were almost exclusively found in teaching hospitals but over the years the equipment migrated from universities to the surgery rooms of private veterinary clinics and more versatile uses were discovered. LASER is an acronym for light amplification by stimulated emission of radiation.

When the laser is switched on, an energy source stimulates atoms in a gas-filled pressurized cylinder to release photons (particles of light energy). The laser-light beam that is the result of this action is powerful enough to vaporize body tissues because the streams of photons are all the same wave-length and travel simultaneously in one direction. In 1999 the Veterinary Surgical Laser Society (VSLS) was formed to help guide veterinarians desirous of more knowledge and expertise in this field.

Tissue pigment also affects how much light is absorbed from a particular laser. So with laser surgery veterinarians use one type of laser to treat diseases affecting the internal structures of the eye and a different type to remove skin tumors since these tissues differ in their water content and pigment.

Veterinarians don’t use cat laser surgery for every surgical procedure but lasers do, in general, have many advantages over scalpels. As it cuts through tissue, the laser beam seals blood vessels, so there is very little bleeding. Controlling blood flow is especially useful when operating on highly vascular areas such as the mouth or nose.

Cat laser surgery may be less painful for the patient because the beam seems to cap nerve endings as it cuts so the cats tolerate the procedure. With this method, veterinary surgeons can sometimes vaporize small skin tumors while the cat is merely sedated.

A vet can also cut more precisely with a laser than with a scalpel. One of the most common uses for cat laser surgery is removal of benign tumors because the vet can target and vaporize only the diseased tissue, avoiding non-diseased tissue lying underneath or around the tumor.

Lasers are also versatile in that they can be outfitted with very thin, flexible ends so the vet can get into difficult-to-reach areas of the cat’s body parts such as ear canals. For cats with ear tumors, the laser surgery can vaporize diseased tissue without harming the ear canal. With scalpel surgery, veterinarians typically had to remove the entire ear canal. With laser, the ear canal is preserved and the cat’s hearing is maintained.

A debilitating disease such as stomatitis, a chronic gum disease, is an example of laser treatment being used successfully. In the past vets tried to control the disease with the long-term use of antibiotics and steroids or by pulling all of an afflicted cat’s teeth. But now they are using CO2 lasers to vaporize the diseased tissue. After two or three treatments nearly all the cats having the procedure are cured. Neutering, spaying, de-clawing and skin mass removal is now commonly done by laser.

The more common CO2 lasers have become affordable so many vets have them but if you are in an area where your vet doesn’t have a laser then discuss the laser option with your vet. If your cat has an illness for which cat laser surgery would improve your cat’s quality of life…have your vet refer you to a veterinarian that can perform the procedure.