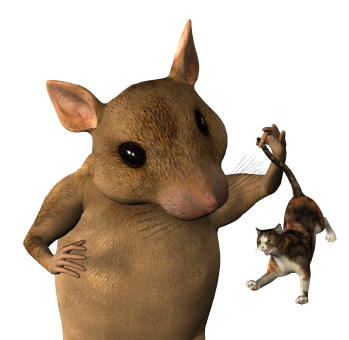 Cat outdoor dangers...coyotes, hawks, cougars, mountain lions and domestic dogs. Coyotes are fast, clever, strong, hungry...and they are everywhere. No matter where you live in the continental United States, Canis latrans, the coyote, can spell big trouble for your cat and is a major example of outdoor dangers.

Once mainly a creature of the open Western plains, the coyote now ranges widely across the continent, living in surprisingly high densities and in startlingly close proximity to humans and their domestic animals. You might think that because you live in a city or in a densely populated town that cat outdoor dangers such as coyotes don't apply but you are wrong.

Coyotes have been seen pacing taxicabs on the island of Manhattan, trotting along the median of busy thoroughfares in California and snatching an animal from its front yard in broad daylight in New Hampshire...as the horrified owners tried to scare it off. Talk about cat outdoor dangers..........

The coyote is called "trickster" by Native Americans because it is a wily, wary, clever, and supremely adaptable creature that has not only survived but thrived despite the worst nature or man could throw at it. Wildlife Services and similar agencies try to keep the coyote population under control.

However, their natural enemies...predators such as wolves, cougars, and grizzly bears were systematically relocated because of changing land use and human expansion needs so the coyote was left free to proliferate with virtually no natural enemies....except humans.

Coyote's normal prey are rodents such as mice and gophers and they will snap up snakes, lizards, and frogs; feed at municipal landfills and from urban garbage bins; and snack in farm fields and orchards. In cities and suburbs, coyotes have turned, more and more, to the easy-accessible population of unwary, free-roaming house cats and small domestic dogs...outdoor cat dangers waiting to pounce and make your cat a sad statistic.

Coyotes have increasingly targeted cats and small dogs, perhaps because of insufficient small wild game or because pets are easier to catch and provide a tastier meal...or it could be the genetic cat vs. dog dislike and the coyote's genetics are dog like.

There is an Eastern coyote variant that is prevalent in Southwestern New Hampshire that resembles a German Shepard, although there are several more variants and this animal can weigh in at up to 60 pounds. Genetic evidence shows that the Eastern coyote's larger size and more aggressive habits are at least in part the result interbreeding with Canadian gray wolves.

On the other coast, cat outdoor dangers are in heavily-settled suburban southern California, where the landscape is different, but the threat from coyotes is every bit as deadly. Many professionals call the coyote the No.1 cause of death of outdoor cats. They are in more danger between dusk and dawn, but have become so urbanized that even at midday, they'll snatch cats from backyards.

Cat outdoor dangers such as the coyote may convince you that your cat is safer indoors. Coyotes are active all year, but pose more of a threat during late spring and early summer, when they have large litters of pups to feed. Hunger and need drive them to levels of boldness that astonish observers. Coyotes have been known to linger outside suburban homes in the early morning hours, waiting patiently for the family cat to be let out.

With all this in mind, it's become increasingly obvious that the best way to keep your cat from becoming a coyote's next meal is to provide her with an indoors-only lifestyle. The many tales of coyotes snatching cats from their own backyards, demonstrates the outdoor cat dangers of even limited solo outdoor excursions. If you feel bad denying your cat the fresh air, sunshine, and exercise the outdoors has to offer, consider training her to walk on a leash....or purchase an outdoor patio or window balcony for your pet.

I have a terrace on two levels where my cats have flap doors to go in and out of that are too high for predators like a coyote. The terraces were already here so it was just a matter of adding the flap doors.

If you don't have existing terraces or balconies and need to create a window balcony type area then to keep the cost down I would suggest you look at the large variation available at Amazon...durable, high-quality pet doors and enclosures in a wide range of styles and sizes.

To avoid attracting the attention of coyotes and other dangerous wildlife, never leave pet food dishes outdoors. Keep trash and garbage in tightly-sealed containers, indoors or in a closed garage if possible. Don't leave food out "for the wildlife" no matter how sympathetic you feel towards them. At one time I had raccoons and opossums arriving late at night to eat the peanuts that were leftover from feeding the squirrels in the daytime. I had to stop that.

Cat outdoor dangers can be minimized if you have a large, active dog patrolling your property that will offer some level of protection from coyote incursions. Many households have both cats and dogs that get along well together. In some areas, ranchers have successfully used donkeys and llamas to guard their livestock against coyotes.

If you are lucky, you may not have coyotes appear very often in your area. Coyotes resemble their domestic canine counterparts, and range from blond and light tan to dark, blotchy gray and black. But they sport erect, pointed ears and a longer, narrower, more pointed muzzle than domestic dogs.

And unlike domestic canines, who tend to carry their tails high, coyotes carry their long, bushy, black-tipped tails horizontally or pointed downward. Look for coyote tracks, which are longer than they are wide, with only the inner two claw impressions showing. (Domestic dog tracks are usually the same width as length and show all four claw impressions.)

And, finally, listen. Coyotes everywhere yip, sing, and howl at the moon...indicative of cat outdoor dangers making an eerie announcement.

Additional cat outdoor dangers are numerous other predators that can threaten your cat's life. Across the northern tier of North America, from British Columbia through the Rocky Mountains east to New England, the fisher (Martes pennanti) has made a comeback. Relatives of minks, otters, and martens, these large, strong, aggressive forest denizens (often called "fisher cats" though they aren't related to felines) are opportunistic hunters with a strong preference for porcupine.

But these dark brown creatures can and do eat cats, especially in rural areas. Fishers, like coyotes, are naturally nocturnal, but have been seen more frequently hunting by daylight. They are adept tree climbers, depriving cats of one of their chief means of escape from cat outdoor dangers.

Cat oudoor dangers include threats from foxes, raccoons, skunks and
bats but they can carry rabies which is the real threat. Keep your cat's rabies vaccinations up-to-date even if they are mainly indoors. It's absolutely essential that we maintain a strong barrier between ourselves and the reservoirs of rabies we know exist in wild populations.

Free-roaming cats carry the potential to break down that all-important barrier. In endemic areas veterinarians necessarily regard any injury or wound of unknown origin in a free-ranging cat as a possible rabies situation, with all the attendant medical, legal, and quarantine ramifications. But because many cat owners take care of their own pets' injuries, it's vital to create awareness of the possible dangers to encourage owners to restrict their cats' unsupervised access to the outdoors.

In the West and Southwest, cougars or mountain lions, have also produced reports of predation on cats (and small dogs). At the same time, cougars can pose a significant threat to coyote numbers, perhaps evening the odds a bit. Mountain lions are infrequent predators of domestic cats in some areas. However, raccoons and opossums will attack domestic cats over food, although they're not natural enemies...but again, rabies are cat outdoor dangers also.

Bobcats, another remarkably adaptable species similar in food preferences and habits to coyotes in some ways, have been know to take domestic cats as prey. This is rare, mainly occurring in times of extreme scarcity of their preferred natural food sources. Remember, a good source for items such as pet containment systems is Amazon.

Hawks and large owls have been known to take small cats and kittens, though infrequently. I've read of a few heavier cats with talon scars on their backs because after being scooped up by the avian predator, they are dropped because a 20 pound cat is more of a snack than the bird had in mind.

Finally, significant cat outdoor dangers include domestic dogs. Even in areas with leash laws, many suburban and rural pet dogs run free and unsupervised, joining up with other dogs and stalking and killing unwary house cats...cats who may be unafraid of dogs because they live with canine companions.

There are also cases where the cat's canine housemate, who has always seemed friendly, will suddenly 'snap' and kill or seriously injure the cat. Often, this happens where the dog has unaddressed behavior issues regarding aggression or territoriality, where the cat becomes the focus of that aggression.