Cat Vestibular Disease is Kind of Scary to Watch 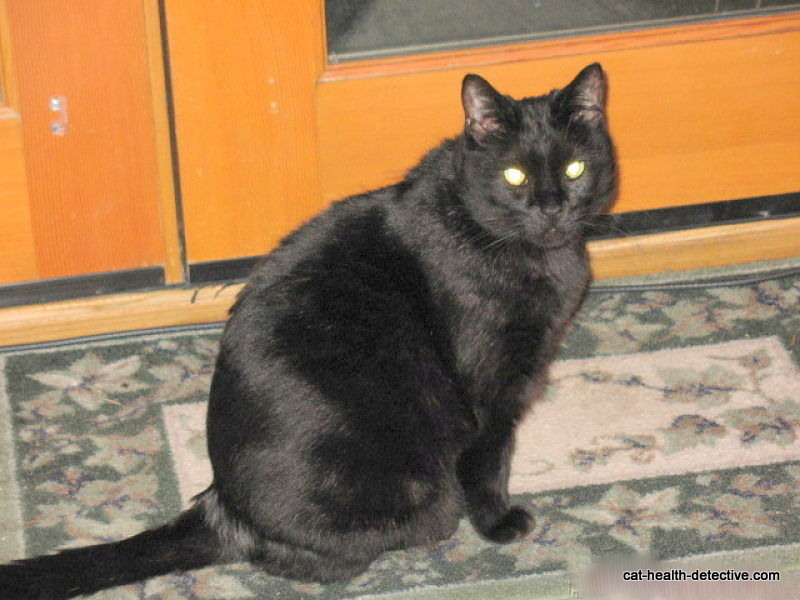 Cat vestibular disease is rather weird to come across accidentally.  Our cat Max Factor, a healthy 13 year old cat that we nicknamed "Moose" and "Neanderthal" because of his size and appearance has always been a tough and strong cat.  Yes, I know that like most of our cats, something will happen to affect their health as they age but this one threw me for a loop.

There was Max, wandering across the floor like he was drunk.  He fell down, got himself up, resumed weaving across the room.  It was Friday night and the vet was closed.  Isn't that always how it goes?  Even with us humans you can be sure many times a health incident happens on a weekend.

My concern was that Max had fallen and hit his head, or that he had suffered a trauma while he was outside.  He only goes out for about 15 minutes in the morning before his breakfast and then again for the same short period of time in the evening before dark and before his dinner.  I ran my hands all over him to check if there was an evidence of body damage but there was none.

I went to Google to check on possibilities and I found out about cat vestibular disease.  Apparently this is common in cats.  The vestibular apparatus (labyrinth) is a complex sense organ that is stimulated by gravity and rotational movements and helps control balance and orientation of the body.  When it gets inflamed its called labyrinthitis.

Labyrinthitis causes problems with balance so the cat wobbles, swerves, falls and rolls over and has trouble righting themselves. The cat can also show rapid jerking eye movements and the head can tilt down on one side.  Since Max's head wasn't tilting at all and he had been on a new medication for just 2 months we made a decision to take him to the local emergency clinic not far away.

There was still a fear that he had been poisoned or had experienced some other serious trauma while outdoors, especially since it had been Halloween the night before and he was a black cat (although he wasn't allowed out that night).

The clinic vet discovered that he did indeed have cat vestibular disease. His ears were checked because an inner ear infection or ear mites are common causes.

A quick blood  test showed that his medication for having feline hyperthyroidism that he'd been taking for two months was not to blame.  He was given another medication to help with nausea and dizziness for a few days.  Hence, I started delving into this disorder to understand it.

The vestibular system communicates with the brain and lets it know when the cat is moving, resting or standing up.  It has numerous nerves that start in the brain and continue to the inner ear.  The inner ear lets the brain know about movement so that the brain can respond.  However, with cat vestibular disease the cat's ability to sense movement is impaired and the brain can't respond accordingly.

To rule out the possibilities of strokes etc. (listed above) a vet does a neurological exam, checking the ear canal, blood tests and urinalysis.  If those are inconclusive then x-rays, a CT scan or an MRI may be needed but then it gets costly.  The cat's face will also be checked to make sure that there is no facial paralysis such as with Horner's syndrome. Other symptoms can be vomiting or diarrhea.

Treatment of cat vestibular disease will focus on the underlying cause and if the cause is idiopathic the cat may receive motion sickness drugs such as meclizine or diphenhydramine to help manage the dizziness but it should improve in a few weeks even without treatment.

At this writing, Max has had cat vestibular disease for 10 days.  We are hoping it will resolve itself soon because he's confused and disoriented.  I will add to this article when he recovers or if there are other changes to his condition that need to be shared.

UPDATE:  Finally, after 28 days, Max walked normally.  As quickly as it appeared, it seemed resolved.  He no longer looked like he was drunk, his eyes were alert, and he also seemed relieved to being feeling normal.  Yeah!