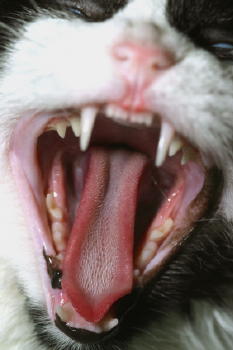 There is a taste gap between you and your cat. The cat tongue is different than ours. Cats have evolved as (obligate carnivores), relying on meat to supply most of their nutrient and energy needs. Humans come from a long line of omnivores, Latin for "devour everything".

Cats have approx. twice as many smell sensitive cells (olfactory receptors) in their nasal passages as the average human, and smelling (olfaction) contributes greatly to the sense of taste (gustation). Young cats have a particularly acute olfactory sense. In the first few days after birth, a kitten can't hear or see, but it can identify its favorite nipple by the odor.

While the nose contributes to flavor, it's the cat tongue that does the job of tasting. The tongue's surface has dozens of humps of tissue called papillae that hold microscopic clusters of taste buds. The taste bud and supporting cells connect to a taste pore on the outer layer (epithelium) of the tongue. A few taste buds also lie on the back of the throat. Each taste cell in the taste bud has several cellular fibers called taste hairs, which detect dissolved food substances.

Many taste buds lie on the surface of tiny mounds of tissue called papillae. The cat tongue has three main types of papillae. The fungi-form papillae are dark, mushroom-shaped knobs located on the sides and tip of the tongue. They hold some of the largest taste buds.

Four to six cup-shaped vallate papillae at the back of the tongue also carry taste buds. The stiff filiform papillae, located in the center of the tongue, do not have taste buds. Instead, these spine-like papillae contain large amounts of keratin (the same material as human fingernails) and are used for grooming.

When your cat eats a mouthful of dry food, its saliva dissolves some of the chemical components in the food, including salts, acids and sugars. The taste buds detect these dissolved chemicals and signal the brain by way of three pairs of cranial nerves.

Taste buds on different areas of the tongue vary in their sensitivity to particular types of chemicals. The brain can identify a taste based on the pattern of gustatory signals it receives.

The feline tongue has other uses besides tasting. It also senses texture and temperature, draws in liquid, picks up tiny food bits, and directs activity in the mouth. It acts like a plunger, pushing food and water down the throat while keeping food from going down the wrong way.

During swallowing, muscles at the base of the tongue pull on the hyoid apparatus, a set of small bones in the throat. These bones then shift forward, closing off the windpipe with a flap of tissue called the epiglottis.

If your cat has ever licked you, you are aware of its "sandpaper" texture which is created by the stiff and curved filiform papillae in the tongue's center. This roughness helps cats clean and untangle their fur as they groom themselves. The rough tongue also aids in feeding.

Wild cats use their tongues to remove feathers or fur from their prey and to lick meat from the bones. Yuck...glad mine are fed from cans and bags of crunchies! 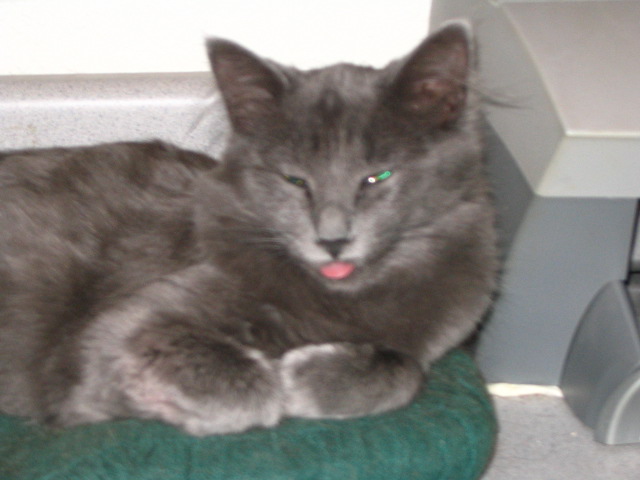 A Matter of Taste?

The tasting capabilities of the cat tongue isn't easily described because they can't tell us. However, some years back scientists did tests trying to learn by adding salt, sugar, sour and bitter items to water and documenting the results.

The cats reacted to the salt, sour items and bitter items but seemed not to notice the sugar. The results were considered inconclusive because a number of the scientists believe that the cat tongue can detect the natural variations in water.

Max, my big black cat, insisted on drinking water from my office toilet while the other 5 cats simply drank from their water bowls. I didn't stop him because I keep the toilet clean and assume he prefers really cold water. I've heard of other cat owners leaving water in a sink or slowly running because of their feline's preference.  However, he stopped doing that once I got a pet water fountain that had recycling water.

As for cats liking sweets, scientists believe they don't taste sweets but a lot of owners state otherwise. Perhaps it's misleading because a cat who licks ice cream may be enjoying the mouth feel, the texture of creaminess and iciness, not it's sweetness.

While your cat goes about deciding which foods it likes and which foods meet their cat tongue standards, it considers multiple factors. The odor, taste, and feel of a food in the mouth are all important.

Cats often choose foods with lots of meat, a strong aroma, a high fat content, a combination of soft and crispy textures, and a temperature of about 100 degrees (the body temperature of most small mammals).

Sounds like they crave "a fresh mouse in a can". Of my six cats, only one wants the same thing every day. The rest drive me crazy with their "finicky-feline" routines and that's a whole other topic which is dealt with in a section called: Finicky Cats