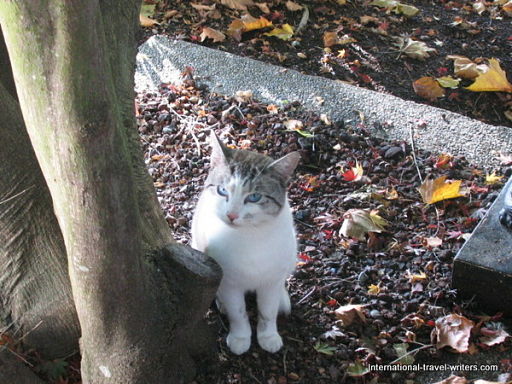 Feline Ischemic Encephalopathy (FIE) was noticed in the 1970’s. Cats became lethargic or overly aggressive, sometimes staring glassy-eyed into corners for hours on end. They would circle incessantly and soon progress to seizures or convulsions. No one knew the cause. Vets knew little about the neurological disease. A veterinarian neurologist at the University of Pennsylvania, Eric Glass, said that no one knew the cause but it was recognized that these cats had seizures and behavioral changes, circling in one direction and sometimes became comatose.

This mystery disease tended to affect young and middle-aged cats. Since the symptoms often appeared behavioral in nature, many vets didn’t recognize FIE as the cause of a feline’s problems. So, it was determined that if a cat had a sudden change in temperament, an inexplicable aggression, as well as an association with other neurological signs that might include blindness or walking in circles…then Feline Ischemic Encephalopathy (FIE) should be considered.

Dr. Nicholas Dodman, at that time the director of the Animal Behavior Clinic at Tufts University School of Veterinary Medicine, said that a cat exhibiting extremely aggressive behavior was brought to him for treatment. He thought it was dominance related aggression or what he called the alpha cat syndrome. He figured this cat had a very boring life. It was circling in the kitchen, and it turned out to be blind. He treated the cat with anti-compulsive medication but it didn’t help. He was never able to confirm what was wrong with it but sometime later he figured it was Feline Ischemic Encephalopathy (FIE).

Researchers began conducting autopsies on the brains of cats afflicted with the condition that vets considered had some striking similarities to the Feline Ischemic Encephalopathy (FIE) disease. They noticed they always had what some people call a stroke of the middle cerebral artery. Since strokes are very uncommon in veterinary medicine, for years they wondered what was causing this.

Then they found that cuterebrae, a bot fly, was found to be associated with it. The bot is a tiny insect normally found in areas populated by mice and rabbits. Researchers also noticed that cats affected with the disorder had brain lesions they suspected were related to the disease. Sometime around 1990 during autopsies on cats with the disease, it was found that microscopic larvae were in the brain of a cat that suffered vascular lesions. They were very small and hard to find and were probably missed during earlier autopsies. Once they realized these were related, the more they found the larvae in the brains of cats with vascular lesions.

Once they were aware that the bot fly caused such brain lesions, researchers soon hit upon the cause. They found that the organism, the bot fly, lays its eggs, which mature in July, August and September, near the entrance of rabbit or mouse dens. The cats go to the dens and smell them and the cuterebra crawls up in the nose and into the brain. There are 34 varieties of bot fly cuterebrae in North America alone so veterinarians are still unsure exactly which species causes the disease.

Feline Ischemic Encephalopathy (FIE) seems to be more common in the Northeast than elsewhere. Dr. De Lahunta, another noted researcher, has found that during years of wet weather when bot fly breeding conditions are ideal, there are more cases of FIE. The bot fly isn’t found in New Zealand or Australia so cats in those countries are at no risk of the disease but it is found in most other places.

Feline Ischemic Encephalopathy (FIE) is rarely, if ever, contracted by indoor cats. This confirms the belief that the parasite is picked up outdoors. Even a cat catching a mouse indoors hasn’t contracted FIE. Only a house cat that gets outdoors, even briefly, has been found with the disease. The disease is caused by the migration of this parasite through the nose of cats to the brain. No definitive diagnostic test for the disease exists.

The early signs of Feline Ischemic Encephalopathy (FIE) are walking in circles, lethargy, aggression, blindness, or upper respiratory problems such as sneezing or nasal discharge…..all these symptoms appear in other disorders such as external trauma, tumors, kidney disease and infectious diseases.

Vets often use MRI brain scans to detect the larvae. Urine tests, spinal fluid tests along with other lab tests may be conducted but the best diagnostic tool is the MRI scan. This is often able to detect a track lesion in the brain from the larvae migration. If done weeks after symptoms begin, it may also show a loss of brain matter in the area where the cuterebra larva is present.

MRI technology has made it easier to detect the presence of the larvae and make an Feline Ischemic Encephalopathy (FIE) diagnosis. This means an aggressive treatment plan can be launched to slow the parasite’s damage. Although the major discovery of the bot fly connection was a major breakthrough, there is no proven cure and so far there isn’t any medication known to prevent the disease.

However, a cat that contracts FIE can be treated with some success if the condition is detected early but severe cases can be fatal. If the disease has progressed to the seizure stage it is less likely that the cat will return to normal and many will be euthanized.

The progression of the disease can be stopped. Phenobarbital is used for seizure control. Along with supportive care a protocol that includes ivermectin, prednisolone and enrofloxacin is used and gradual improvement of clinical signs can occur over several months. Ivermectin is a medication generally used to treat heartworm and other parasites in pets such as the cuterebrae that causes this disease.

Although ivermectin may stop the parasite’s continual destruction of the brain, any vascular lesions caused by the disease remain, leaving lingering neurological problems and sometimes blindness.

Many cats return to normal but in some cases problems may still continue. It really depends upon the amount of damage done by the parasite, but uncontrolled seizures, compulsive circling and other behavioral changes that transpired, unfortunately, may continue and periodic neurological evaluations are recommended. If it isn’t caught early most who survive will be left with altered mental abilities, blindness or seizures.

It hasn’t yet been proven whether cats treated with ivermectin remain immune to the disease and experimenting continues in the hope that a vaccine will be developed. The moral of the story is to keep your cats indoors, particularly in July through September, when the bot fly is likely to latch onto a host. Since there are many reasons not to let your cat outside…….this disease just adds to the list of reasons.