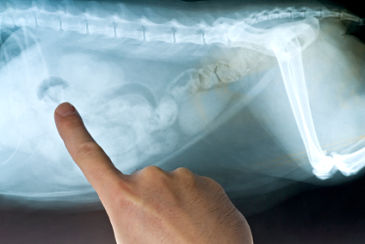 Feline kidney disease is a condition to watch for. Stop and think about pulling the plug in your sink….wastewater flows down the drain and this actually emulates how your cat’s kidneys function in flushing waste materials from the body. Approximately 200,000 tiny holes in the kidneys, called nephrons, eliminate those waste products and regulate electrolytes (potassium, calcium, phosphorus, and sodium) in your cat’s body.

When these nephrons start to die, waste products can no longer be flushed form the body and electrolytes can no longer be processed. You can imagine this process by picturing the filter holes in the bottom of your sink clogging up, so that over time your kitchen sink becomes a repository of waste.

However, it is important to see the difference between chronic and acute kidney failure and to distinguish between “failure,” “malfunction,” and “disease” when speaking about feline kidney disease. Acute kidney failure is kidney damage caused by injuries, infections, kidney stones, tumor or toxins (including antifreeze). Acute kidney failure starts suddenly: it’s an abrupt shutdown of the kidneys. This is an extremely serious condition and depending upon the cause and severity already done to the kidneys…it may or may not be treatable.

Chronic kidney failure is a slow, progressive breakdown of kidney function, with no apparent cause. Chronic kidney failure is also known as CRF regardless of the stage. CRF is fatal, but with diet, vet care, drugs, and hydration, the disease can be managed so that afflicted cats can lead happy, active lives for months to years, depending on the individual cat. The progression of feline kidney disease varies from cat to cat.

Feline kidney disease usually refers to any process that damages the kidneys while kidney failure actually refers to the advanced stages of kidney breakdown, when the cat’s kidneys have effectively shut off. When a cat shows enough symptoms to warrant a checkup and diagnosis, the kidneys are actually malfunctioning but usually they aren’t in complete breakdown.

The term feline kidney disease is also commonly used in connection with a congenital kidney disorder known as polycystic kidney disease (PKD), mostly found in Persians, Persian crosses, and a few other exotic breeds but rarely in any other breeds.

This is where kidney cysts form. In polycystic cats, an ultrasound is the simplest and most accurate method of identification. When cysts are found, the treatment usually consists of altering the diet to a lower or better quality protein brand and administering subcutaneous fluids. In PKD cats, the cysts can also rupture during activity, causing pain and tenderness to the point where the kidneys can appear visibly swollen.

Secondary conditions such as anemia and increased phosphorous are also common. PKD cats will sometimes develop gum infections, become lethargic, urinate and drink water more frequently, and throw up. However, PKD symptoms don’t include the same chronic wasting as CRF and PKD causes no signs until CRF develops.

In addition to acting like a filter, the kidneys also produce erythropoietin, which stimulates bone marrow to produce red blood cells. Cats with chronic renal failure (CRF) often produce too few red blood cells, causing anemia, a common secondary complication. CRF can actually have one or more causes, such as age, genetics, environment, and disease.

Age is the most common factor. Although cats of 8 years or more may seem more susceptible, there is no median age for onset of CRF and it can happen in younger cats.

Symptoms of feline kidney disease are variable. Kidneys can function quite normally on a 30% capacity rate. While this may sound like good news, it makes CRF extremely difficult to detect, as over two-thirds of your cat’s nephrons are already nonfunctioning by the time he shows clinical symptoms. Some owners are hesitant to having precautionary blood tests urinalysis for CRF, perhaps because of the added cost the cat’s annual examination.

However, if the vet could catch a cat at 75% kidney failure rather than 85%, it would be helpful.  Since normal blood tests can show normal until after 2/3 of function is lost, there is a sensitive blood test for kidney function called the Iohexol Clearance Test that can zero in on problems much sooner and should be utilized more often that it is.

Although CRF isn’t reversible, diet changes and subcutaneous fluid treatments can halt the progress of renal failure. So the sooner your cat is diagnosed, the sooner it can begin a new diet and veterinary treatment for the feline kidney disease that can enhance its chances of leading a relatively normal life.

Symptoms for feline kidney disease or CRF are similar to symptoms of other feline diseases, so kidney failure can surprise and baffle even very watchful cat owners. There is a condition known as “acute on chronic kidney disease” in which a vet is treating the cat for its acute symptoms, inadvertently discovering the chronic version of feline kidney disease before the kidneys have reached the 70% failure levels.

Early detection and diagnosis are key factors to effective management of CRF. Remember, by the time your cat shows symptoms of feline kidney disease, he’s probably already lost 70% of his kidney function, so with early diagnosis, you and your vet can begin instituting dietary changes, medication regimes, and fluid treatments to slow the progress of CRF.

Also, because the kidneys are central to the body’s general functioning, cats with CRF often develop secondary complications such as anemia, high blood pressure, and hyperparathyroidism (over production of parathyroid hormone). The sooner these are managed, the better.

Classic symptoms, even in the relatively early stages, are increased intake of fluids and frequent urination. As the condition progresses, your cat may have a loss of appetite, nausea and vomiting, weight loss, and a poor hair coat. Also, because of potassium depletion due to vomiting and excessive urination, cats with CRF often develop muscle weakness and wasting, which can lead to a hunched gait, exhaustion, and possible weakness in the hindquarters.

Your cat may also appear dehydrated; his breath may have an ammonia smell; he may become depressed and weak; and he may develop mouth ulcers. Once you notice symptoms, take your cat to your veterinarian immediately. You vet may do complete blood count examining the red and white blood cells, a blood chemistry test to check electrolytes, blood urea nitrogen (BUN), creatinine, cholesterol, glucose, and liver enzymes, as well as a urinalysis to determine if your cat has CRF. Two of the most telling signs of CRF are elevated levels of creatinine and BUN in your cat’s blood. Both are waste products that are normally filtered from the blood via the kidneys.

In addition to these diagnostic tests, your vet may periodically give your cat blood tests and urinalysis as part of the cat’s ongoing assessments. However, if you get two blood tests in a row that is pretty close in the values, there may be no need to put the cat through the stress every month. Also, for cats that don’t cooperate with jugular sampling, some vets take blood from one of the cat’s legs.

Treatment of feline kidney disease is meant to enhance the quality and length of your cat’s life. Some CRF cats are hospitalized so they can be monitored and given intravenous fluid therapy. Depending on the severity and complications of the CRF, your vet may also put your cat on medication…both to normalize the content of body fluids and improve kidney functioning or to treat the secondary complications associated with CRF such as anemia, nausea, and appetite loss. Some of the commonly prescribed drugs are tiny doses of human medications such as Pepcid AC to reduce stomach acid, which can prevent cats from eating.

Your pharmacy can generally mix the drug in recommended cat-sized dosages. However, never give your cat human drugs without first checking with your vet. The good news about CRF is that you, the cat’s owner, can play a significant role in managing the condition. Home treatments in conjunction with regular vet checkups can give you some control over this condition.

Feeding a cat with feline kidney disease involves reduced sodium and phosphorous levels and a prescription diet rather than store-bought cat food. This is done to balance phosphorous, protein and sodium. Vets recommend better quality protein in the diet. Acidosis is a typical problem associated with CRF where kidneys cannot rid themselves of excess acids from the diet and this is a major reason for a modified prescription diet.

By reducing phosphorous and sodium levels in the cat’s food, you’re decreasing the workload of the kidneys, thereby reducing the buildup of waste in the cat’s body. Also, getting the correct food into your cat is frustrated by the fact that cats with CRF often have a loss of appetite. While kitty needs the proper food to maintain body weight and overall health, he may feel nauseous and not want to eat, which can be detrimental to his health.

In severe cases, an appetite stimulant or hand-feeding may be needed. If he’s finicky, your cat may not adjust to the prescription diet, but you can take some steps to ease the transition. Introduce the new food gradually by mixing it with your cat’s old food. By mixing the old and new food together in a closed contains for a while, the scents mingle and the cat may be more likely to eat the prescription food.

Try warming the new food to body temperature. If it’s dry, a little hot water makes it more palatable and this also helps with hydration. Remember that cats eat what they smell. Try mixing the juice of salt-free, water-packed tuna or clam juice with the food. Or mix a tiny bit of catnip in the food. Coax your cat to eat by talking to him, sitting with him and stroking him or try to feed him by hand. And always place the food dish in a low-traffic area of your home.

Fluid therapy is part of the treatment for feline kidney disease. The amount and frequency of fluid to be given subcutaneously (under the skin) depends on your cat’s weight and the stage or severity of the feline kidney disease. Usually a vet or his technician will teach the cat owner to administer fluids as part of the home care regimen and most owners say that fluid therapy becomes easier with practice. It keeps your vet bill lower by doing fluid therapy at home but don’t increase the specified volume of fluids without checking with your veterinarian. If it is needed the vet will supplement the fluids with potassium.

Making a home comfortable for a cat with feline kidney disease involves keeping stress levels down. Stress reduces water drinking so avoid introducing known causes of stress such as adopting a new kitten, moving or changing the family schedule. Clean the litter box frequently, wash the litter box when you change the litter at least once a week and keep the litter box in a quiet, low-traffic area of the house.

If your cat shows signs of muscle deterioration, consider buying a new litter box with lower sides and also lower the window perches. I bought small pet stairs for my arthritic cat and these might help your cat reach some areas and also placing low furniture in strategic, accessible spots will help.

Protect your cat from drafts and extreme heat or cold and handle your cat gently to avoid nausea. You might consider a heated bed that could make your cat more comfortable. There are some nice ones now available in a variety of prices.

See examples of heated beds and pet stairs at Amazon below.