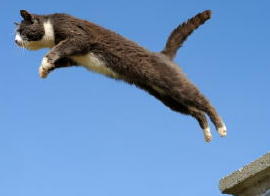 The feline nervous system is almost as complex as ours is and it also contains the same functions that interact cohesively.

(A) The central nervous system is composed of the brain and spinal cord. Three protections are :

As marvelous as the feline nervous system can be, there are possible disorders. The four most common neurological diseases found in many clinical practices are: (1) congenital abnormalities, (2) trauma, (3) tumors and (4) middle or inner ear infections.

(2) Trauma causing damage to the nervous system can occur if a cat is hit by a car or becomes stuck under something like a garage door. The back end of the animal is affected most often. The tail or spinal cord can be damaged or back end nerves can be torn. Many cats with severe damage and fractured pelvises will regain normal function with treatment, a lot of love, and of course…time. Each case is individual. Sings observed with his type of injury include paralysis or weakness of the hind limbs, inability or difficulty with urination and defecation and a limp tail. Generally, the more sever the sings, the less optimistic the prognosis. Once a nerve is cut, it will not reconnect, but it can regenerate at a very slow rate.

(3) Tumors can occur in the feline nervous system. Lymphosarcoma is the most common type of nervous system cancer found in cats. It is usually found in cats less than 2 years old that test positive for feline leukemia virus. Lymphosarcoma can cause tumors in the brain and spinal cord and in other non-nervous tissue organs. Older cats can develop other tumor types in their spinal cords and brains. The causes of these tumors are unknown. Some board-certified veterinary surgeons have successfully removed certain brain tumors. The prognosis depends on the tumor type, the location in the brain and the general health of the cat.

(4) Middle ear (otitis media) or inner ear (otitis interna) infections can occur as extensions of external ear disease, ruptured eardrums or spread of infection through the blood. The sings observed with deep ear disease include vestibular or balance problems, head tilt, circling and deafness. The prognosis is good for resolving these infections if scarring does not occur and if deeper structures such as the tympanic bullae are not involved.

People like to relate neurological diseases that affect humans, such as strokes, to those of cats. A stroke is a blood clot or bleeding in the brain that results in a lack of oxygen to the brain tissues. The after-affects depend on the location and the extent of damage. Symptoms usually diminish after the first few days as brain swelling subsides.

Strokes in humans are also called cerebrovascular accidents. The equivalent in cats is called cerebral ischemia or infarct. They do occur, but not frequently. Signs include dementia, circling, partial weakness and blindness. Other causes of brain disease would be ruled out before oxygen loss to the brain is diagnosed or suspected. (This happened with our 21 year old cat, Tartar, who experienced dementia but after a stroke she circled constantly and we decided euthanasia was a kind choice).

Seizures are a neurological problem that people are most familiar with in humans and animals. A seizure is an uncontrolled release of electrical activity in within the neurons of the brain. When you observe a seizure, it seems as though it lasts for a long time, but seizures rarely last more than 30-60 seconds.

Seizures are scary episodes to observe because a normally responsive pet will not recognize its owner and may even bite if it is held down. There is nothing an owner can do to make a seizure shorter. Be sure that the cat cannot fall off something and hurt itself, and then just leave it alone and observe until the seizure ends.

Many possible causes of seizures in cats exist. Epilepsy, a disorder triggering recurrent seizures with no underlying disease process occurring in the brain, is not as common in cats as in dogs or humans. Phenobarbital, a drug that is often used to control seizures in humans, can be safely used in cats.

Seizures, abnormal behavior, lethargy, stupor, coma, instability, weakness or paralysis, muscle rigidity, tremors and abnormal vision are signs of disease in the brain. A diagnostic work-up for seizures and other brain-localized disease would initially include a complete physical and neurological exam, a complete blood count, chemistry panel and urinalysis.

If problems persist, the next steps might be skull X-rays, CSF tap and analysis, an electroencephalogram, a computerized tomography scan, and a magnetic resonance imaging (MRI) or radioisotope brain scan. It can be expensive to pursue a definitive diagnosis, and referral to a veterinary neurologist may be needed to provide access to diagnostic equipment and interpretation.

A full diagnostic work-up would rule each of these causes in or out as possibilities. Many of these causes have specific treatments and even cures. Some require long-term management with medication.

Signs consistent with disease of the spinal cord are limb weakness or paralysis, instability, stiff or painful muscles and loss of normal reflexed. The diagnostic work-up options are similar to those for brain disease with the additions of a myelogram (an X-ray taken after dye is injected around the spinal cord) and an electomyelogram measuring the electrical activity of muscle.

Additional causes of spinal cord diseases include congenital malformations such as those found in the Manx breed, degenerative disease such as arthritis, vertebral fracture, nutritional imbalances, intervertebral disk disease, and those causes associated with brain disease.

Achieving a distinctive diagnosis for a neurological problem can be an involved process. Treatment options are based on treating the specific cause of the problem or relieving the symptoms. Antibiotics, anti-inflammatories, antifungals and anti-seizure medications are various options in the treatment of neurological conditions.

Your veterinarian will need to put the diagnostic puzzle together in order to create a diagnosis or presumptive diagnosis, and then devise a treatment plan. He may need to consult with a veterinary neurologist.

If you suspect a feline nervous system problem, you should consult with a veterinarian as soon as possible. A thorough history taking and neurological exam are the first steps you vet will take to assess your cat’s system.

A neurological exam covers a cat’s entire body in an attempt to pinpoint the location of a problem. The cat’s mental status is evaluated. Is the cat bright and alert or depressed and non-responsive to stimuli that would normally be exciting, such as a feather? How are the cat’s gait and posture? Is the cat upright and balanced or does it fall to the side or circle? The cranial nerves are tested.

There are standard protocols for assessing each of the cranial nerves. Examples are observing pupil size change in response to light, and checking for normal swallowing reflex. Limb reflexes are also tested. Like humans, cats have patellar (knee jerk) reflexes. Pain, touch and the other senses are evaluated. The muscle tone and skeletal conformation are examined. All of these observations are used to diagnose the size of a problem.

Some feline behaviors are innate. The cat is born knowing how to act in a certain way. A kitten nursing from the queen is a good illustration. Other behaviors are learned as a result of individual experience. Certain behaviors arise as a response to sensory information transmitted through the cat’s feline nervous system. The cat’s hunting and prey behavior is an excellent example. Information on prey scent, sound and movement is integrated by the brain, and the attack plan is created.

Genetics determines some of the characteristics of the feline nervous system which aid in learning. One cannot easily measure the intelligence of a cat. It is controversial to use ease of learning a behavior as a measurement of intelligence. Differing motivation, natural behavior patterns and physical limitations between species make establishing intelligence a near impossible task.

The feline nervous system in cats is integral to maintaining life. The powerful brain controls all sense recognition, behaviors, learning, reflexes and body functions. When one looks at the physiology of the feline nervous system, it is hard to relate it to actual function. The microscopic connections created between receptors, neurons, synapses, muscles and the brain is an amazing web.

The diseases of the nervous system are numerous and often difficult to diagnose without in-depth and costly tests. Luckily, neurological diseases are not common, and most cats enjoy happy lives with normal feline nervous system function.