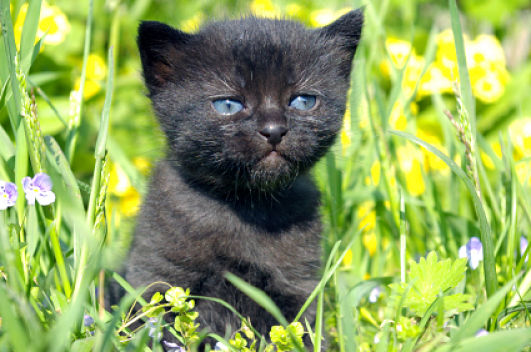 Stray cats outside ...nothing pulls at my heartstrings more than looking out the window and seeing another pathetic little creature, a stray cat, trying to survive. And, it makes me wonder if it's a lost house cat or a neighbor's cat mooching a meal. Since we now have 6 cats, which is our limit, we had to take the recent one to a shelter. I was thrilled that they seemed to think she would get adopted soon.

We pretty much have had a routine for our arriving strays that have joined us. Fearing that they have parasites or disease doesn't stop us because we keep them outside briefly and quarantine the newcomer when we are at the stage of having it join the household.

We've had instances where the forlorn little critter turns out to be a neighbor's cat looking for a handout. However, we do live near ample apartments and when it turns out to be close to the end of the month, an alert goes off in our heads. People moving can be thoughtless and not bother to take the animal to a shelter...they just leave it behind to fend for itself.

This expands the stray cats who are foraging. So we start by asking the neighborhood children if they've seen the cat before. Then we check the newspaper ads and bulletin boards for "Lost Cat" listings.

While this is happening we typically are feeding the cat outside and if the weather is bad we give it shelter in our shed with a small heater nearby. When there is no positive feedback that this cat belongs to someone we phone friends and see if anyone is wanting a cat. When that fails we take the cat to the shelter.

However, with our last three instances, a decision was made to keep them so it was off to the vet to get them checked out. We have stray cats checked for FeLv and FIV first. We've been lucky that our cats haven't had either of those. Then come the rabies and FVRCP shot. It's best to assume the cat hasn't had its shots and give them to it. If the cat is not neutered or spayed, depending upon its age, get that done as soon as you can.

The stray cats should have separate accommodations from other animals for at least a week. This quarantine will not only protect your other cats while you treat the newcomer's fleas or other issues but it allows time for the cat to adjust to its surroundings.

We put Max downstairs in a rec room for a few weeks while he got comfortable with us and our other two cats got used to him being around (they would have their noses sniffing under the door so they knew he was there).

Coty also spent a week in the rec room but she adjusted so well she was integrated into the house quickly. She was just happy to have a home.  But Giorgio is still there because he's too lively for the others who have gotten older and it's still a work in progress to simmer him down and have him learn "cat manners".

Chanel#5 was downstairs in the rec room for several months. However, we kept her in the bathroom with food and litter for a month while she adjusted to us. She was extremely feral and afraid of everything. At first we tried her in the rec room but she she was so small she could climb into the skeleton of the pool table and it would take hours to get her out.

She was six months old but only 2 1/4 pounds so she was starving. She ate cans of food like crazy and we would take turns sitting on the closed toilet seat in the bathroom talking to her so she could get accustomed to our voices and our smells. Eventually she got confident enough that she enjoyed being picked up and hugged.

When we finally moved her upstairs to the main level she wanted to be carried around all the time like a baby, I suppose she felt safer, but she eventually got brave and spent more time on the floor walking around.

Coty, although she's not very big, took Chanel#5 under her wing and started protecting her from the other cats. They weren't going after her yet because she was still so young, but they were really curious about the "furball".

Later, Revlon developed a jealous streak, and Chanel is very wary of her....with good reason. All in all, it is a wonderful feeling to see those starving, needy little creatures turn into healthy, robust residents of the house.

When you take in strays and give them a home you are also taking on an enormous responsibility for their well-being.  As long as you consider the changes to your life with these little waifs, the rewards of love and affection are wonderful.