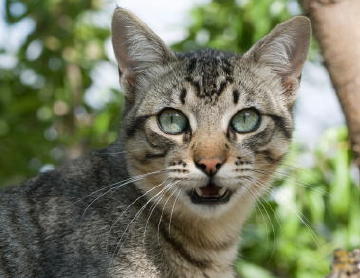 Signs of asthma in cats are when your cat is coughing, wheezing, has shortness of breath, or seems to be continually trying to cough up nonexistent hairballs. Squatting with hunched shoulders and neck extended and low to the ground or upward extended neck while gasping for breath are other visible signs.

Excess mucus forms, the airway walls swell with inflammation and then the airway muscles go into spasms leading to constriction. The problem is more common than many cat owners know. Some owners may simply dismiss important telltale signs and assume their pet is trying to expel a hairball. However, cats can get the same airway spasms that lead to acute constriction of breathing as humans suffer. Severely affected cats may even display extreme respiratory distress.

Asthma in cats can be further complicated since an allergen or stress can trigger feline allergy symptoms. This may be prior or during vomiting, sneezing, sniffling, or even wheezing like human allergy sufferers do. Plus, symptoms can vary from cat to cat. Cats can have several different signs, and the signs can be anything from coughing and wheezing with no other problems, or, to severe respiratory distress or difficulty breathing, requiring oxygen therapy.

Furthermore, asthma in cats is a catchall name for a group of chronic inflammatory respiratory diseases involving the lower airway. Because asthma can mimic other feline disease, such as heartworm disease, heart disease, or pneumonia, it’s important to get an accurate diagnosis. Most cats cough to some extent, which is a real clue that a cat could be suffering from asthma in cats.

The disease can sometimes be diagnosed with chest X-rays, but these can be inconclusive because some cats that are between episodes may have chart X-rays that are normal. There are procedures that retrieve cells from the lower respiratory tract and include the tracheal wash and bronchoscopy.

The bronchoscopy allows the vet to look down the airways of the anesthetized cat with a small scope and then samples of the mucus lining is obtained with a cytology brush. The cell type of allergy know as the "eosinophil" is prevalent in the secretions of an asthmatic cat. However, this finding is made complicated because not only is it found in normal cat respiratory secretions but parasitic infections such as lungworm (a fecal test can rule this out) and heartworm also lead to the heavy content so other tests are done to eliminate these possible infections as the cause.

Experts say the disease more often affects young to middle-aged cats and can show up at any time, yet the causes of asthma in cats are still puzzling and it does turn up in cats of all ages. Some evidence links allergic responses in the respiratory tract to certain substances in the cat’s home environment. Very dusty kitty litters or carpet air freshener sprinklers or even tobacco smoke can be the culprits. So if you are alert and remove environmental factors that may impact your cat, you will help relieve your cat’s symptoms and ward off further episodes.

If you’re not sure which irritant might be responsible, you can do some tests on your own after your vet diagnosis is asthma in cats. Try switching the litter to a dust and odor-free brand, or replace the litter with sandbox sand or newspaper for several weeks and monitor the situation. Indoor cats may show improvement after you completely clean the furnace and frequently replace the furnace filters. High filtration vacuum bags may also help. Some cat owners invest in air purifiers to help clear the air. Cats, like humans, are seasonally affected when the pollen count is high.

Treatment for asthma in cats is similar to human asthma management. The most common medications your vet may use are bronchodilators (drugs to help open up the airway), short or long-term use of corticosteroids (to decrease inflammation), and antibiotics (if an infection is present). Even though some of the same drugs that work for people can work for your cat, only your vet can dispense the correct drugs in the appropriate dosages. The traditional way of treating asthma in cats is with prednisone (a steroid) either as daily pills or monthly injections. If the cat doesn’t respond well to this, human asthma drugs in tablet form may be used.

Some asthmatic cats are intermittently on steroids for their whole lives, while other cats have bad bouts and may be on for a couple of weeks. For example, your cat may only be on steroids during the summer months and then be tapered off them. There aren’t usually many side effects from the traditional e asthma in cats treatments. Prednisone can predispose them to a bit of weight gain and to diabetes, and the bronchodilator drugs can make them a little hyperactive and restless, but the side effects are not usually so much that people need to stop treating their cat. Actually, cats are more tolerant to the medications than dogs and the biggest thing is that it can be a hassle to give the cats pills every day. See Pilling a Cat

If your cat suffers from asthma in cats, one of the scariest things for you both is dealing with an acute attack in the middle of the night. A responsible pet owner should immediately take their cat where it can get immediate help such as an emergency 24 hour clinic.  Asthma in cats can cause life-threatening attacks and if the cat is coughing and is otherwise fine, it’s not going to be a life-threatening emergency.

But if the cat is actually having a hard time breathing, it needs to go in immediately and get injectable medications, such as bronchodilators. Terbutaline is an airway dilator commonly used (acts in 30 minutes) and owners can be shown how to administer this injection in an emergency at home. Theophylline is an oral medication usually given at bedtime. Epinephrine is also fast-acting (as little as fifteen minutes) and the cat may also need oxygen cage therapy.

While experts say the symptoms of feline bronchial asthma can usually be controlled, complete cures are rarely possible and it’s a matter of managing the condition. Ongoing research is seeking ways to improve asthma in cats management such as pulmonary function testing which judges how effective the lungs are at moving air and if there’s a bronchoconstriction which is typically what would occur with asthma.

By monitoring the changes in a cat’s pulmonary function test, a vet can tailor a therapy to the individual cat. It also can show whether the cat is getting better or worse. For instance, not all cats need prednisone, and some cats might do better with some other medications.

Asthma in cats hasn't had the benefit of inhalers until relatively recent times. A "pediatric spacer" was invented for infants which has a tubular chamber attached to the inhaler on one end and a face mask on the other. and it was found that it could also be used for cats so it has solved the feline inhaler problem. The cat takes about 7-10 breaths from the face mask to be properly dosed but even just a few breaths helps. "Flovent" is the most popular corticosteroid inhaler and is used twice daily long term. Airway dilator inhalers such as albuterol-containing "Proventil" or "Ventolin" are used for flare-ups.

Some vets and cat owners feel that a lifelong drug regimen isn’t in a cat’s best interest so they seek alternative therapies for asthma in cats. Acupuncturists believe they can stimulate certain factors in the cat’s body which can help relax the bronchioles when it is released. They believe the cats with asthma have problems not only with the respiratory system but with the whole body and that’s why acupuncture is an alternative.

It tries to balance the body system...the negative and the positive forces in the body. However, it’s not always an easy process because cats and needles don’t necessarily mix well. Therefore some certified acupuncturists like to use a combination of laser acupuncture and acupressure on feline patients. This way they don’t feel the needles going in although they may feel a little bit of heat at the point, that’s it.

The lasers don’t burn through tissue. They’re used to stimulate acupuncture points without a needle breaking the skin. Acupuncturists also teach cat owners how to administer acupressure on their cats at home. It’s just using pressure on certain points along the cat’s front legs two or three times per week which is especially helpful during asthma attacks. There are few side effects from acupuncture. Although it may help, it won’t cure the problem. So owners are also instructed on other methods like having a good exercise routine, lower stress, proper diet, and looking at the things around the house…from carpeting to detergents.

Various herbs are also cited as being beneficial for alleviating asthmatic symptoms. These include marshmallow (not the candy), comfrey, Echinacea, aniseed, garlic, licorice, and kelp. Some natural food companies combine herbs into a single remedy for asthma and coughing problems. Also, placing 3 drops of eucalyptus oil in a cup of boiling water and letting the asthmatic cat breathe the fumes will help clear the cat’s airways.

Hypoallergenic diets of quality cat food ingredients also is a benefit. Experts seek out the handful of specialist brands that offer allergic cats alternative protein sources in their canned and dried foods such as venison, rabbit, lamb, or duck. The improvement in diet means an overall improvement in health, according to acupuncture practitioners.

Return from Asthma in Cats to Cat Health Homepage