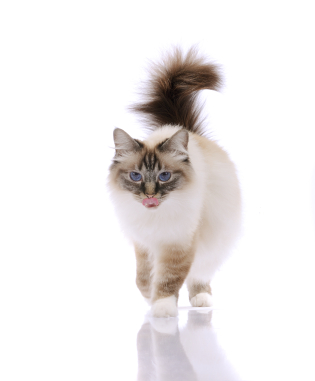 Birman cats are the winner of the cat breeds with the most magical fable regarding their origins.  They have been called "The Sacred Cats of Burma"  who inhabited a Buddhist monastery in Burma where there was an elite colony of pure white cats with amber eyes whose job it was to protect important documents from rats. The most favored cat was Sin.

One day thieves attacked the monks. As Sin's mentor lay dying, Sin climbed onto his chest to calm him. When the monk died, his soul left his body and flowed into Sin's. Her amber eyes turned blue and her white coat took on a magical quality so that her face, ears, tail and legs became a lovely seal brown and the rest of her body a golden mist.

Only Sin's four feet...the only parts that were touching her mentor as his soul entered her body...remained white. You would expect such unique creatures, fabled to be temple guardians, to be prized highly...and they are.

While there is no clear record of the origin of Birmans, The Birman breed was first recognized in France in 1925. There are lots of stories of how the cats first arrived in France, even that a pair were smuggled out by a Vanderbilt.

However, the Birmans were almost wiped out as a breed during WW II. Only two cats were alive in Europe at the end of the war, a pair named Orloff and Xenia de Kaabaa. The foundation of the breed in postwar France were offspring of this pair.

They had to be heavily out crossed with long-hair different cat breeds such as Persian and Siamese to rebuild the Birman breed. By the early 1950's pure Birman litters were once again being produced. The restored breed was recognized in Britain in 1965 and by the CFA in 1966.

The first Birman cats were seal-point. The blue-point color was introduced in 1959 using Blue Persian lines. New colors were added by the work of English Breeders in the 1970-1980 period which included chocolate, red-point, and the tabby/lynx version.  A Birman was also used to create new breeds like the Ragdoll cat in California.

The Birman, genetically speaking, has the Siamese gene responsible for the pointed pattern, as well as the white mitten or gloving gene that contributes the white markings to the feet.

The Birman is semi-longhaired with color at the points (face, ears, feet and tail) and pure white feet. Medium to large in size, males are often bigger than the females. Its coat rarely mats or becomes tangled and is silken in texture. In order to comply with b reed standards, the Birman's body should be of an eggshell color or golden, depending on the intensity of the markings color.

In the CFA, the Birman cats are shown with markings of seal, chocolate, blue and lilac points. Tabby variations are also allowed. Birmans have sapphire colored eyes. The show-quality Birmans have an elongated, stocky body that is muscular.

The head should be strong and broad and longer than it is wide. Facial features include a Romanesque nose, nearly rounded eyes as deep blue as possible and a medium length muzzle. The ears are placed as much on the top of the head as on the side.

The show quality Birman's distinctive white markings are explicitly described in the show standard. The "gloves" (that part of the white that adorns the front portion of all four feet) on the front feet should end in an even line across the paws at the third joint.

The "laces" or "gauntlets" are an extension of the white on the hind feet and are found on the back of the feet going up the hocks. These laces end in an inverted "V" fashion. The gloves and laces are expected to be pure white and as symmetrical as possible. The only allowed white areas are gloves and a spot of white in another area is a fault in a Birman cat.

The Birman should not be mistaken for the Burmese which is a different cat breed. The Birman makes a wonderful pet. It is sweet, affectionate, playful and inquisitive.