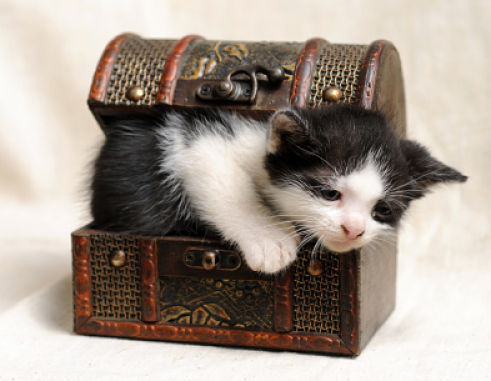 Purebred cat problems go hand in hand with specific cat breeds. There are approximately 130 cat breeds that exist worldwide. The Cat Fanciers’ Association accepts pedigreed breeds for showing of around 41 and the International Progressive Cat Breeders Alliance recognizes 73. Some have been around for centuries, like the Persian. But others such as the Munchkin and Selkirk Rex have only been recognized since the 1980’s.

The long-term results of domestication and the development of specific breeds gets quite a lot of debate with cat lovers worldwide. With natural selection, individual cats propagate the species based on their ability to survive within their environment along with their ability to produce healthy offspring. This is the survival of the fittest in action.

However, with domestication and human interference we have developed many breeds that would have problems surviving on their own. For example…the Sphinx was bred for hairlessness but wouldn't be able to take the cold of the northern climates nor the heat and sunburns in hot southern areas. Like many other breeds it would fare poorly in the wild.

Breeders sometimes intentionally breed cats to enhance certain features as well as to increase the novelty of the appearance but some of these modified characteristics can cause purebred cat problems for these pets or show cats. For example… the Persian’s flat face makes him susceptible to upper respiratory problems, including airway obstruction.

The Siamese’s nervous and energetic nature may be the trait that makes him prone to an obsessive-compulsive disorder known as hyperesthesia syndrome or problems that of a metabolic or physiological nature. These are purebred cat problems.

New cat breeds develop from spontaneous mutations that permanently change the genetic material…or…evolve from the hybridization of two or more previously known breeds. The first example…genetic mutation involving the skeletal system produced the Manx, which has the tail missing, and the Scottish Fold breed which has curled ears.

Mutations affecting hair produced the curly haired Cornish Rex and Devon Rex. The second example… cross breeding produced several common breeds such as the Himalayan, the Tonkinese, and the Ocicat, whose ancestors include Abyssinian, Siamese, and American short-hair cats.

Purebred cat problems are further expanded because to continue in the development of a breed there is frequent inbreeding whereby parents are bred with offspring or siblings with siblings as well as line-bred (the mating of more distant relatives such as cousins). Because purebred cats are often more closely related, structural and genetic health disorders causing purebred cat problems occur more frequently.

Veterinarian medicine has improved over the years and they now are able to give some advice to breeders in the control and elimination of genetic diseases that cause purebred cat problems but it’s a continuing science. Polycystic kidney disease (PKD) is found in Persian and Himalayan cats.

This disease is characterized by renal cysts, that result in kidney failure and reduced longevity. (I lost my Himalayan cat, Bandita, to this disease when she was only 9 years old.)

PKD can be confirmed or eliminated as a potential purebred cat problem by ultrasound, which can be done on kittens as young as 8 weeks old. PKD is a dominant inherited trait and it can be inherited from the queen, tom or both. The Cat Fanciers’ Association has outlined a means of eliminating PKD from breeding colonies for its Persian members.

The control of this disease consists of testing all breeding animals for renal cysts with ultrasound; those that are positive can be neutered, thus eliminating the spread of PKD. However, not all breeders in other areas follow this advice.

In some instances, the specific genetics of a disease causing purebred cat problems is unknown. However, statistical analysis confirms breed susceptibility. At the School of Medicine in the University of California some years back, it was found that acquired myasthenia gravis, a neuromuscular disease, is more prevalent in cats with Abyssinian and Somali breeding.

The result is that veterinarians and breeders are more aware of this breed propensity so they are better able to diagnose and treat the disorder by knowing purebred cat problems.

I have to admit that after losing my beloved Himalayan, Bandita, to PKD it was a time to look long and hard at what my next cats would be. Her brother, El Diablo, was still alive and lived to be 15 but he had ongoing purebred cat problems with Blepharitis, an inflammation of the eyelids. Although I adored them both we made a decision to return to barn cat type calicoes and other non-purebreds.

They have the advantage of hybrid vigor and survival of the fittest principal. They tend to have healthy genes but they offer less predictability in terms of conformation and personality than purebreds. So, we have two more calicoes now aged 11 (our previous calicoes lived to be over 20) and four other mutts that were strays at the door.

Choosing a cat is a personal choice but consider your lifestyle. Yes, you can get captivated by the charm and beauty of a purebred cat and perhaps want to enter the cat in show competitions, but if you fit into this category and are a novice, investigate the breed personality as well as the breed’s purebred cat problems. If you work long hours and have little time for cat grooming…adopting a Persian is probably a poor choice. Or…if you value your solitude…a Siamese won’t cut it.

Take some time with selecting where to get your new cat. If you want a purebred then don’t just take a cute purebred kitty at the pet store in the mall. You spend a lot of money but aren't necessarily getting a good representation of the breed. In my case, I bought Diablo at a pet store in Los Angeles, California. Although I got his papers, I didn't know enough at that time to check on the reputation of the breeder.

A couple of years later, loving Diablo’s disposition, I went to the same pet shop and had them get me his half sister , Bandita, (same tom, different queen). She was just being weaned and I had to wait to get her. However, when I took the little kitty home she was covered in fleas and that made me feel uncomfortable about whom I had been dealing with. In hindsight, I wish I had been armed with some knowledge of what to look for. I loved the two, El Diablo and Bandita, but wished I'd had them longer.

A lot of what we know today of purebred cat problems wasn’t well known to the public back in the mid-1980’s when I bought my two kitties. Seek out a reputable breeder from whom to purchase your kitten. Go to the cat shows and talk with some breeders about the breeds that you’re considering and about the reputation of those selling those breeds.

Once you select a potential breeder, ask lots of questions like “how long did the parents/grandparents live?” “Have close relatives had purebred cat problems, and if so, what are the chances of my kitten being affected?”

It’s better to know up front if there are issues with purebred cat problems. At least then you can make an educated decision and decide if the problem is minor enough that you can accept it. There are some beautiful purebreds that make wonderful pets even if you aren't going to display them at cat shows.

Here are a few examples of some breed specific purebred cat problems:

Abyssinian: A short-haired breed with a hair that has bands of colors on each hair shaft. The Abyssinian comes in many colors, including ruddy, red, blue, and fawn. This breed has a slim body type with large ears and eyes. Although this cat is known as a high-energy cat, he’s vocally quiet.

American Shorthair: This cat is medium to large in size with a muscular body and broad, rounded head. It has short fur in many colors and patterns, the most popular being silver-tabby and brown-tabby.


Birman: Originating from Burma, these long-haired cats are born pure white. They develop varying color coats at 3-4 months old. These cats have a stocky build, blue eyes and white feet.

Devon Rex: The Devon Rex originated in England, and has short, wavy hair. This cat comes in all colors and patterns, including the Siamese pointed pattern.

Himalayan: Created as a hybridization of Siamese and Persian breeds, the Himalayan has long hair and color points like a Siamese. These cats are generally docile, and vocally quite. The Cat Fanciers’ Association considers it to be a category of the Persian breed.

Korat: Korats have a moderate body type that is neither slight nor round. They have large green eyes and short blue hair tipped with silver. Like the Siamese, the Korat comes from Siam(Thailand) and like the Siamese, is a vocal breed.

Maine Coon: One of the largest purebred cats, Maine coon females usually tip the scales at 10-12 pounds, and males are even heavier. Their coat is long, and colors vary from solid colors…red,white, and blue…to multicolored tabbies. Some of the original Maine coons were polydactyls (multiple toes). Because polydactyls were barred from the show ring, breeders gave preference to cats with normal feet so fewer Maine coons have extra toes today.

Manx:The Manx gene produces tails of various lengths divided into four categories: rumpy (have no tail vertebrae), rumpy riser (have one to three vertebrae at the base of the spine that are immobile), stumpy (have a short tail stump that may be curved or kinked), and tailed (have normal tails). The cat is round in appearance and comes in many colors and patterns. The longhair Manx is called the Cymric in some cat associations.


Oriental: Both longhair and shorthair are recognized by the Cat Fanciers’ Association. Develped by breeding Siamese and American shorthair, Abyssinian, and Russian Blues, Orientals come in more than 300 colors and patterns. Like the Siamese, the Oriental is a long, sleek cat with pointed ears and slanting eyes. This a vocal breed.

Scottish Fold: Scottish Folds have folded or normal ears. It a kitten’s ears are to fold (caused by the cartilage curling downward and forward), they do so at 3 to 4 weeks of age. This breed may have long or short hair, and may display any and all colors and patterns. The Scottish Fold is a medium-sized cat with a quiet disposition.

Siamese: One of the oldest and most popular domestic breeds, the Siamese originated from Siam (Thailand). The Siamese is svelte in body type with large, pointed ears and blue eyes. Hair is short and color patterns include seal point, blue point, chocolate point, and lilac point. Some associations accept additional colors. This breed is active and highly vocal.

Somali: Bred from Abyssinian cats the Somali is a longhaired Abyssinian. The Somali has medium length hair and a bushy tail. This breed’s hair is banded with color on each hair shaft just like the Abyssinian with the lighter color closest to the skin. Colors are also ruddy, red, blue, and fawn. The Somali has large, pointed ears and almond-shaped green or gold eyes.

Sphynx: Although the Sphynx is considered a hairless breed, these cats have a finedowny fur that gives the skin the texture of a warm chamois. This breed comes in all colors and patterns. The Sphynx is energetic and friendly.