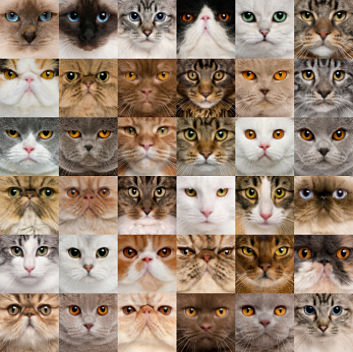 Types of cats include the Burmese cat breed which represents such a unique animal that it should have a wonderful fable surrounding it like the Birman has, but it is actually a 20th Century cat. It owes its existence to a walnut-colored cat named Wong Mau and an eccentric student of genetics, Dr. Joseph Thompson. Wong Mau came from Burma to San Francisco on a freighter in 1930 and was given to Thompson.

Fascinated by her unique coloration, Thompson proudly displayed her to his friends in the cat world. Most of them were unimpressed. They thought she was a poor Siamese of very dark point color and improper eye color.

Thompson theorized that she represented an undiscovered genetic lucus. Together with a group of breeders and geneticists he set up a controlled breeding program to establish her genetic makeup.

This group selected a seal point Siamese male, Tai Mau, as the closest genetic type to Wong Mau. Offspring of these two cats were then bred to each other and back to the parents. Careful records were kept, the first really scientific breeding study ever attempted in types of cats and cat breeds. A pattern soon emerged.

The kittens segregated into three groups: pointed cats with the typical Siamese dark points, pale body and blue eyes, cats like Wong Mau with a much darker body color but still discernible dark points and aqua eyes; and a surprise group of dark seal brown cats with almost no difference between body color and points and gold eyes.

It seemed that Wong Mau was not, in fact, a separate breed from the Siamese but an intermediate stage between it and the newly discovered breed which was christened Burmese.

One of the biggest stumbling blocks in the path of the pure Burmese was the uncharted existence of a group of genes that resulted in the chocolate and blue colors. We now know these were present in Wong Mau and Tai Mau. Very early in the breeding program, fascinating kittens of a blue-gray color and others of a goldish-chocolate appeared.

While these kittens intrigued early breeders, they could not be placed in the known genetics of the breed. The kittens were largely placed as pets, types of cats that weren't bred true.

The gold-eyed sable brown cats, thus produced quickly gained popularity and in 1936 were granted breed status by several registering associations. Unfortunately, in their efforts to widen the gene pool and to show their cats, some over-enthusiastic Burmese cat breeders misrepresented the intermediate cats as true Burmese cat breeds and the largest association, the Cat Fanciers' Association (CFA), suspended registration in 1947, stating that the cats did not breed true. Burmese cat breeders worked hard to purify their stock and in 1953 were reinstated in the valid cat breeds group representing these types of cats.

The difference between the American Burmese and Burmese in the rest of the world dates back to this time. The new breed was exported to fanciers in England in the early 1950's. From these first imports came Sealcoat Blue Surprise who created a vast rift between the British fanciers who thought her enchanting and the American Burmese cat breeders who stoutly maintained that she could not be real Burmese.

The British and other Europeans rapidly accepted the new colors and continued to breed to the original body standard which called for a dainty cat with a moderately wedge-shaped head. The Americans were determined to wipe out any suggestion of Siamese in the body style and progressed to the muscular, compact, round-headed cat we see today.

Over the years the dilute colors of Burmese have now been recognized by all North American registering bodies for championship competition, so we see not only sables, but champagnes (a warm honey beige), blues (medium blue with warm fawn undertones), and platinums ( a pale silvery gray with fawn undertones) in the show ring today.

In addition, interested breeders have created the Tonkinese breed which is in fact the intermediate stage represented by Wong Mau. Enjoyed by many, these lovely cats have characteristics of both the Siamese and Burmese parent types of cats in cat breeds. CFA now recognizes the existence of the European Burmese as a separate entity with championship status in international shows.

It doesn't matter what style or color you choose because the cat underneath can be enjoyed as an interactive cat. Burmese are intensely social cats and play the role of host or hostess rather well. They are climbers and enjoy the tallest scratching post. They are also jumpers that can easily make it to your shoulder from the floor. They are low maintenance, easily groomed.

Return from Types of Cats to Cat Health Homepage