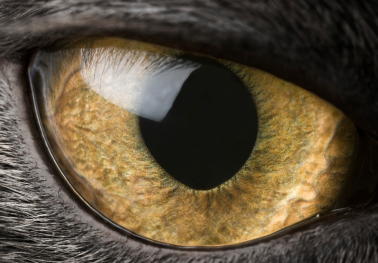 Photo above is a healthy cat eye without cataracts

Cat cataracts are relatively rare. Felines suffer infrequently from diabetes-induced cataracts, and although inherited congenital cataracts do exist in Burmans, Himalayans, Persians, and British Shorthairs, the incidence is low and the cataracts are often small enough to be ignored. Cataracts do not necessarily cause blindness. Some remain small, with little effect on vision.

Of those that do threaten blindness, many are candidates for sight-restoring surgery. Even if blindness does result from an inoperable cat cataract, most cats (if kept indoors) live a good life even though blinded. The cataracts themselves are not painful, but can predispose the cat to inflammations and other problems that can be painful, so owners must be watchful.

Just behind the iris and pupil is the lens capsule. The lens sits behind the aqueous (a clear fluid) and in front of the vitreous (a clear gel). The lens normally is flexible and crystal-clear, adjusting to keep vision in focus. A cataract is a clouding or opacity of the lens. In advanced stages, the lens hardens and can no longer make the necessary adjustments.

Cataract surgery in humans is commonplace and in our companion animals it has become more common in the last decade or so. Basically, the procedure is the same and the improved treatment for animals has changed the surgery protocol. It pays to catch problems early.

Whenever the eye appears different than it usually does...has increased opacity, cloudiness, a change in pupil size or a change in vision, the owner should suspect something is amiss. Don't just think that the cat is getting older and the eye is clouding up. All lenses do show aging changes, but those changes can be a real problem, especially if there is a disparity from one eye to the other.

Normal aging changes in the lens are called nuclear lenticular sclerosis. Throughout life, new lens fibers are laid down just like you form new epithelium (skin). Your skin sloughs off but you can't have sloughing of the lens because it would clutter the eye.

Instead of sloughing, the old lens material is pushed into the center. The center of the lens then gets denser and denser, and that results in a blue-gray appearance to the eye. That's nuclear lenticular sclerosis. It does not interfere with functional vision. You can tell the difference between the blue-gray and the white of cat cataracts.

The most common cat cataracts are inflammatory cataracts and cataracts secondary to trauma. Uveitis, an inflammatory disease of the eye is often implicated in cat cataracts. Signs of uveitis are striking. The eye color changes, and the surface of the eye roughens. This is a painful condition for the cat and he typically squints and has watery eyes. The pupil may become quite small. Cats suffering from uveitis show sensitivity to light and they may have spasms in the eyelid.

A common cause of uveitis is systemic disease, such as FeLV feline leukemia-virus or it can be FIP feline infectious peritonitis, or it could be FIV feline immunodeficiency-virus or toxoplasmosis.

Any intraocular inflammation of the eye can result in the formation of a cataract, and early treatment of the underlying cause and control can prevent cat cataracts or minimize the effect of one that has formed. Trauma to the eye is another story completely. The cat is unique from the standpoint that if it gets trauma to the lens, the lens should be removed.

If they get in a fight and a nail punctures the eye, thus hitting the lens and damaging the outer layer, then that lens should be surgically removed because it predisposes the cat to cancer. No one knows why it is unique to cats vs. dogs, but dogs do not get that type of post-inflammatory sarcoma. Removing the lens seems to negate the chance of cancer.

Some good news is that one of the causes of cat cataracts and those in dogs was discovered close to twenty years ago. As a result of learning of the arginine-deficient neonatal milk replacement diets...a problem was recognized. Thankfully, all neonatal diets are now supplemented with arginine.

If you notice a problem with your cat's eyes, your first action should be a visit to your regular vet. If uveitis is suspected, your vet might check for underlying causes and prescribe medicated eye drops to bring the inflammation under control.

If the inflammation is more serious, a cataract has already formed, or there is a trauma to the eye, you will probably be referred to a veterinary ophthalmologist. This is a specialized field so there aren't many in the USA. You can find a list of many of them at the web site of the American College of Veterinary Ophthalmologists which is www.acvo.com .

In these cases, the ophthalmologist will evaluate the eye and recommend treatment. Even if a cat cataract is present, it doesn't necessarily mean surgery. With inflammatory cataracts, medication is often effective in slowing progression. The size and location of the cataract are also factors in treatment. Cataracts in some areas of the lens are more likely to progress, while those in other areas are not.

If there is a small congenital cataract located in the center of the lens, the nucleus (which is an inactive area as far as metabolism in the lens is concerned) and the cataract just keeps getting pushed more toward the center of the lens, this causes vision that we wouldn't like, because in bright light with a near object, the pupil gets little and cats have a hard time seeing through the central cataract.

But in regular daytime illumination and at night, the pupil is dilated or mid-size and cats can see around it. They don't require surgery. Even a larger, more obtrusive cataract can be left in place if it's not causing complications that can't be controlled with medication.

If you control the inflammation that the cataract is causing, a blind animal leads a happy life. You have to monitor the animal for other problems in the eye, medicate it, and they can be blind and comfortable. While blind cats do remarkably well indoors, it's essential to maintain contact with a vet to ensure that complications don't develop.

The cataract can cause inflammation, and chronic inflammation can cause glaucoma, an extremely painful condition. Careful observation and use of eye drops are often enough to keep the cat comfortable. For cats retaining some sight, keeping indoor lighting dim will help them to see better.

Surgery is called for with a puncturing trauma, as already noted. Other possible surgeries can be congenital cataracts that are larger or not located in the nucleus and thus more likely to progress, secondary cataracts resulting from uveitis or other inflammation may be a candidate if the inflammation is treated and controlled. Some people don't do cataract surgery if the cat has uveitis because cataract surgery causes inflammation in the eye, so if the eye is inflamed already from uveitis, it can lead to some more complications with surgery.

In order for your pet to be considered for cataract surgery, it must be free of serious illnesses, skin and dental disease. Pre-operative blood tests are performed in all animals to help rule out any undetected kidney or liver disease. For the cat to benefit from surgery, the retina (the tissue in the back of the eye that receives light) must be intact and functioning.

If cat cataract surgery is chosen, the procedure used is the same as in human medicine. A tiny incision is made in the eye and a machine called a phacoemulsifier is inserted. The "phaco" uses ultrasonic to fragment the cataract, followed by suction to extract the pieces. The surgery success rate is over 90% since the phaco came into veterinary use.

Time in surgery has been greatly reduced and postoperative inflammation lessened. The biggest risk in cataract surgery is a short-term increase in intraocular pressure about 4-6 hours after surgery. This is almost always transient and controlled with medication. The long-term vision risk is retinal detachment, and that happens in 5 percent or less of post-surgery animals.

The cat owner also has to consider finances. Cataract surgery is expensive. For the pre-op workup, surgery, and post-surgery checkups, rates can range from $2000 and up. Medications, necessary for anywhere from two months to the rest of the cat's life, are an additional cost.

There is also the demand of owner participation because eye drops have to be given four times a day, without fail. There are other sources for medications (that don't require a prescription) available from alternate places such as some of the vendors like Pet Care Choice listed on the Pet Products page.

Surgery may or may not include lens implants. In humans it's pretty routine to have lens implants to normalize vision so you can read the newspaper and watch television. Without the lens, a cat is far-sighted. They see fairy well, but have trouble with small things close up. They can do well without it, but it's better with a replacement.

Lenses specifically made for cats have become available in the last 10 years or so. Proponents of intraocular lens replacement for cats say that the replacement lens in the capsule actually decreases the chances of lens capsule opacifcation after surgery, so there's a benefit of having the lens in there, aside from the visual benefits.

Of course the lens implant is another cost to consider. If that makes the difference between having cat cataract surgery and not having it, then by all means go ahead without the implants. There are also times when it's surgically impossible to get an implant into the eye, when the lens capsule has ruptured, for example. Just removing the cat cataract can restore vision.

Remember, cat cataracts are rare. If your cat is faced with one, you might restore his sight with surgery. But even a blind cat can lead a long and happy life as long as inflammation is kept under control.