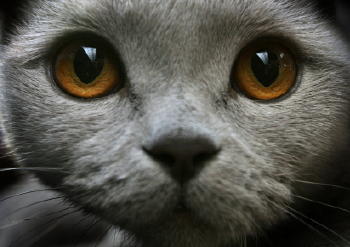 Cats eyes includes both the cat eye and their structure which is much like ours but with significant differences. They function as reflectors and have an expanded field of vision. Light must pass through the complex structure of the  eyes and then, the visual area of the brain must interpret the signals it receives from the eyes. Researchers can describe in great detail how the cat eye processes light but they cannot tell us exactly how a cat's brain interprets the signals.

Muscles attached to the lens alter its shape, as necessary, to focus light on the retina. The light hits the retina and stimulates chemical reactions in millions of specialized cells called rods and cones. This chemical reaction triggers electrical energy, which then travels to the visual area of the brain via the optic nerve. The brain's visual area interprets the patterns of nerve impulses, enabling us...and our cats...to see an image.

Cats are carnivores and they have to see movement so seeing color isn't of prime importance. Cats eyes health is primal since cats hunt at dawn and dusk so the cat's eyes have adapted to dim light. The light-sensitive cells in a cat's retina are apportioned to enhance night vision.

Cats have a rod rich retina and since rods cannot sense color, their greater number of rods gives cats "dim light" vision but minimizes their color perception. Cats have about 6 times fewer cones in their retinas than humans do and cones are color sensitive, only functioning in bright light.

For years it was believed that cats saw only black and white with some gray shades. Further experiments showed that by training a cat with food rewards it could distinguish some colors but it also showed that color perception is not important to cats...seeing colors doesn't help cats survive but cats eyes health does.

A cat's eyes are much larger in proportion to its body size than ours are while our pupils are always surrounded by visible irises and whites, (selera) in dim light a cat's pupils dilate to fill almost all of the visible portion of its eyes.

These large, wide-open pupils allow even faint light to reach the cat's retina. In bright light, your cat protects its sensitive retinas by closing its pupils to a vertical slit that admits far less light than a round human eye.

Most nocturnal animals including cats have eyes that shine in car headlights because their eyes have a reflective layer called the tapetum lucidum located directly behind their retinas. The cells of the tapetum contain reflective crystalline structures.

It reflects back light that has passed through the retina, redirecting the light for a second pass over the light sensitive retina cells. You are, in effect, looking through an animal's wide-open pupils at light reflected back from the tapetum. Researchers estimate that a cat's eyes are about 6 times more sensitive to light than our eyes when the cats eyes are without problems. Cat eye health is very important.

When you stop and think about it, prey such as mice and rabbits, have their eyes positioned far apart on the sides of their heads while the eyes of a predatory animal are close together at the front of its head. Cats are well adapted to hunting. They've got eyes that focus very clearly when they stare at something.

The cat's field of vision in one eye partially overlaps that of the other. When a cat looks at an object...within this overlapping area of binocular vision each eye sends a slightly different view to the brain. The brain interprets these two views as a three dimensional image, allowing the cat to judge the distance between itself and its prey.

A cat's total field of vision is wider than ours and its wide area of peripheral vision is highly sensitive to movement. Even when you watch your cat stalk it's toy, crouched and creeping forward with its eyes fixed straight ahead, it will notice danger or opportunity approaching from any direction except directly behind it. Cats eyes health has to be maintained to focus and function properly.

Cats have wide-angle vision in part because their corneas are larger and more curved than ours. A cat's cornea is actually more important for refracting, or bending, light toward the retina than the lens is. When a cat concentrates on its prey the cat fine tunes the focus with its lenses and positions its eyes so that the image falls on the area centralis, a small, highly sensitive portion of the retina that produces the clearest vision.

Cats see best at distances of approximately 6-20 feet, but they cannot focus their eyes as close to an object as a human can. It is estimated that cats do not see clearly focused images at much less than 3 feet. For information on problem conditions see the links below.