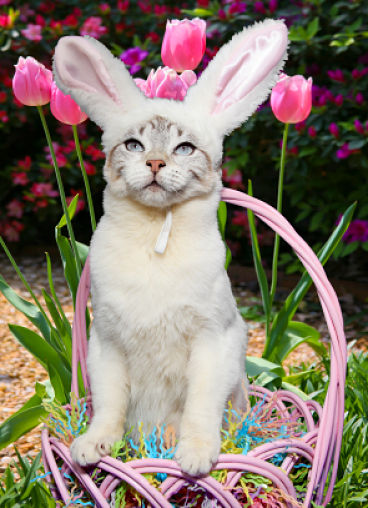 Cat ears are really quite amazing.  There are around 30 muscles attached to their ear flaps (we only have 6) which enable them to rotate as much as 180 degrees.  They swivel like the turret on a tank and you can see them following sounds intently.  Their ears are like antennae, catching sounds and pulling them into the ear canals, continuing on the brain to decipher what they've heard.

They hear sounds as low as 20 cycles per second and up to 60,000 cycles in the upper range while we are around 20,000.  Your cat can hear the squeak of a mouse before you do mainly due to the shape and musculature of its ears.

The cone shape of cat ears catches and funnels sounds down to the eardrum.  Another unique thing is cat ears can move independently.  If you cat hears a small sound, he may twist just one ear to listen more closely.  If it sounds really interesting, he'll then turn his head and point both ears at the sound.

Keeping your pet's inner ears healthy is vital to his highly developed sense of balance that originates in the inner ear.  When an infection hits the inner ear, this precise balance is often disrupted.  He also signals his moods with ear postures.

A contented and calm cat will carry his ears up, forward and slightly to the side. An aggressive or defensive cat will pin his ears back against his head.  A fearful cat will hold his ears in a horizontal position, out from the sides of his head. These are all indicators of whether you should choose that moment to interact with your cat or not.

Deafness...cat ears are not prone to deafness although an old cat can lose some hearing as they age.  But cats are smart enough to have "selective hearing" and may fool you by pretending they have a hearing problem when they simply don't want to respond.

However, there is a gene for deafness and it is commonly associated with the genes that cause white coloring in dogs and cats.  Some solid white cats with blue eyes are deaf in one or both ears.  Often a dog or cat with coloring on the body but an all white ear flap will have a hearing defect or be deaf in that ear.

Researchers don't know why this happens, but it often does.  Even if your cat has hearing loss in one ear, he can live a long, healthy life.  The other ear will pick up sounds just fine.  In fact, you may not even notice he has a hearing loss.  Cats that are completely deaf usually use their sense of sight and touch (vibrations) to cope.  These felines especially, should be inside-only cats to protect them from dangers they can't hear.

Foreign Objects...cat ears seem to be less prone to getting foreign objects in their ears than dogs are, probably because they're a bit more cautious about where they stick their heads.  Outdoor cats will sometimes end up with foxtails or burrs in their ears that can cause problems.

Foreign objects irritate the ear canal itself, leaving it open to possible infection.  They can also puncture the eardrum, leading to other more serious problems, including infection of the inner ear and loss of hearing.

The first symptom is usually some head shaking.  Foreign objects tickle the ear canal and bother the cat.  If the object stays there, the cat may not only shake his head but also scratch.  If you can get your cat to stay still,  you can shine a flashlight into the problem ear.

If you see a foreign object, you can try to pull it out with rounded-tip, plastic tweezers.  But be extremely careful not to scratch or injure the ear canal while you make this attempt.  Usually veterinary assistance is required, but if your cat is calm, you may be able to hold her while the vet pulls the object out; otherwise anesthesia is required so that the vet can dig deeper if necessary.

Ear Mites...our sixth cat, Giorgio, was always shaking his head when we first started feeding him outside.  He was a neighbor's neglected cat that eventually lucked out and joined our cat menagerie.  I suspected ear mites and later treated him for them.  Ear mites are insects from the arachnid order (like spiders) that live symbiotically with their hosts...like in cat ears.  These insects are everywhere...in the carpet, in the bed, on the skin, or in cat fur.

Usually, mites remain in balance with their host because if the host dies, they die too.  However, things sometimes get out of whack.  If your cat's ear wax or discharge appears to have dark brown or black gritty things in it (resembling coffee grounds) and he scratches at his ear, he probably has ear mites.

Your vet can confirm ear mites.  Medications are available to treat ear mites, but some natural remedies can also be quite effective.  In the book Encyclopedia of Natural Pet Care written by C. J. Puotinen in 1998, there is a recommendation for a solution of 20% tea tree oil for ear mites.

To make this solution...mix 2 tablespoons of tea tree oil with 1/2 cup of light olive or vegetable oil.  You can also add garlic or rosemary to the oil mixture if you want.  Use this sparingly and clean the ears regularly, wiping out excess oil and discharge.

Otitis Externa is an infection or inflammation of the outer ear canal...not the ear flap.  It can be caused by a number of things, including bacteria, yeast, ear mites, and fungus.  The first symptom is head shaking or scratching...pretty much the same as the ear mite's symptoms.

If your cat has otitis externa, one of his cat ears may obviously be bothering him and you may think he has a foreign object inside his ear.  But with an outer ear infection the ear will usually smell damp and cheesy, whereas a foreign object won't have such a smell.

If the infection or inflammation isn't treated, it can spread to the eardrum or inner ear, causing permanent hearing loss.  Also, severe pain from the infection causes many cats to injure themselves scratching and digging at their ears.  Vet care is needed to treat this condition and there's no set time period to treat it, as different treatments are necessary for different causes of the problem.

An illustration is that the medication used to treat a bacterial infection may not be the proper treatment for a fungal infection.  Several different ointments can be used to treat otitis externa.  When the vet discovers the cause he will then recommend a course of treatment.

Otitis Media refers to infections of the middle cat ears  directly inside the eardrum.  This infection usually happens when an untreated outer ear infection spreads to the middle ear or when the eardrum is damaged by injury and bacteria is able to invade.  Again, head shaking and scratching are typically the first symptoms.  If the outer ear is also affected or the eardrum is ruptured, the ear may also have a bad odor.

Any infection to the middle ear is considered dangerous.  Not only are such infections very painful, but they can damage your cat's hearing.  Also, there are many nerves that run through the middle ear so middle ear nerve damage could affect your cat's facial expressions and movements.  Veterinary care is required to decide the treatment, which may vary depending upon the cause  of the infection.

This may entail cat inject-able antibiotics or oral antibiotics and an antibiotic ointment may also be prescribed if he has an outer ear infection as well.  In severe cases a cat is anesthetized so that the ear can be flushed with warm water (with or without a cleansing agent) to clean out any residue from the infection.

In extreme cases when oral medication isn't working, your vet may suggest surgery to open and clean out the middle ear.  Surgery can be effective but sometimes addition treatment is required afterwards for several months.

Otitis Interna refers to the inner cat ears infection and instead of symptoms such as shaking the head and scratching, your cat may appear unbalanced, tilting his head to the side, or he may stagger like he's drunk.

Inner ear infections are always serious and should be considered life-threatening because a problem can easily spread to the brain.  Veterinary care is always required in these circumstances and your vet may even refer you to a specialty clinic or hospital.

Untreated otitis interna is potentially fatal, especially if an infection spreads to the brain.  Success of the treatment and time of treatment varies, again, depending upon what caused the problem.

Bacterial infections can usually be cleared up relatively quickly with antibiotics, as long as the antibiotic regimen is carefully followed.  Fungal and yeast problems can be more difficult to treat, but most respond to medications.

There are a number of good ear cleaning products on the market that clean and dissolve ear wax and debris and dry the canals.  These solutions are slightly acidic and that discourages the reproduction of bacteria and yeast.

A holistic home cleaner for cat is a mixture of apple cider vinegar and water ear wash...diluted half and half...on cotton swabs to help keep the cat ear clean and slightly acidic.