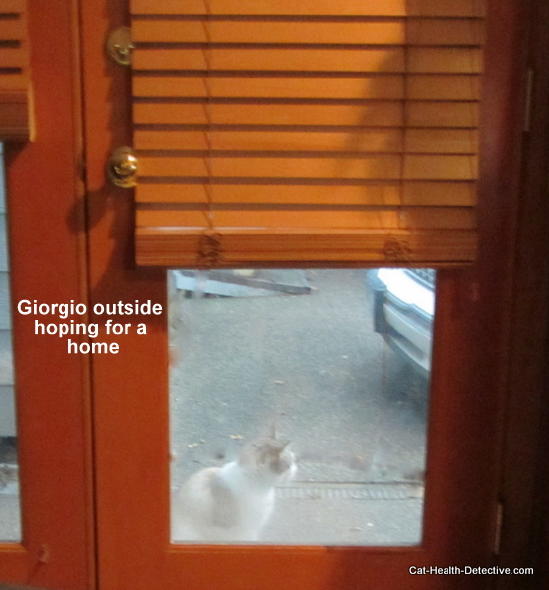 The stories of cat abuse are horrific and almost as bad are the cases of cat neglect. This is how we ended up with cat #6 recently! Our oldest two cats (Revlon and L’Oreal Blaze) were adopted from the Seattle Animal Shelter about 12 years ago. The other three strays arrived at varying intervals since then…looking pathetic and needy. We believe Max Factor, who turned up around 2 years later, was abandoned because he showed all the behaviors of a trained house cat. A few more years went by and Max, who is allowed outside for a half hour each day, returned home with a 6 month old waif we named Coty.

Again, approximately 2 years passed, and what we thought was a two month old kitten at the door was actually a starving 6 month old…we named her Chanel #5 because she was our 5th cat. We vowed that she was the last one and kidded that we had put out a NO VACANCY sign. We did pretty well for the last couple of years and although we had 2 strays arrive, we gave them food and shelter in the garage until we could get them homes. A vet found a home for one stray and we took the other one to a local no-kill shelter. However, the cat we have named Giorgio Armani, started visiting daily from a nearby neighbor’s house.

Experts divide cat abuse (animal abuse) into two categories: deliberate cruelty and cat neglect. You can pretty much drive through any neighborhood anywhere in the USA and see examples of it every day. Neglecting an animal can be just as cruel as deliberately hurting or killing it, but the motives are usually quite different.

Some people who are guilty of cat neglect are simply unknowing or apathetic, while others adore animals but have a compulsion to “collect” more animals than they can possibly care for.

I can attest to the fact that you have to be able to fund cat health care such as vaccines, yearly checkups and cat medicines when cat illnesses happen. Plus, there is neutering or spaying because most strays like ours haven’t been altered. Along with that care is the daily maintenance of a well-balanced diet, a clean blanket or bed and fresh litter if the cat is indoors. Cat neglect isn't an option.

On the other hand, cat abusers, those persons that intentionally abuse animals are often driven by violent urges. They are typically more likely to have a record of violent crime than non-animal abusers from the same neighborhood. These persons that create misery for animals are not normal.

The impulse to abuse animals usually starts in childhood and although excused as pranks or a phase they are going through by parents and/or teachers…in many cases it’s just the warning of worse to come. Youngsters that take out aggression on animals grow into aggressive acts against people.

This is not just an outlet for aggression but also a means of control. If you know of an animal abuse case, contact your local animal shelter, veterinarian, or law-enforcement agency for information on where to report this cruelty. Usually the Humane Society of the U. S. is a good place to start.

In our situation, this gaunt, underfed cat kept coming to our door. Cat neglect looked like a possibility. He had strange coloring that was attractive and the most gorgeous blue eyes. I guessed that somewhere in his mixed heritage there had been a Siamese cat.

We started feeding him and were thinking of taking him to the animal shelter but upon asking around in the neighborhood to see if he belonged to anyone we discovered that he did have owners. They had 2 dogs and 2 cats. I did recall seeing him scampering down the street behind a teenage boy on several occasions.

On one such occasion I stopped the boy and asked him where he lived and he pointed to a condo nearby. I told him we were feeding his cat and he said that they had given their other cat away because they didn’t have enough food for them. He said he was grateful that we were feeding this cat because he was fond of him.

So, for the summer months we fed his cat that now appeared at our door 3 or 4 times a day for food. He was so loveable and would purr quickly when he saw that he was being taken care of.

We saw him scratching and treated him with Revolution, a flea control treatment. We also worried that he ate a lot but was still skinny so we gave him a dewormer and his weight slowly showed signs of improvement. However, the weather was changing and getting colder plus we discovered that he wasn’t being allowed into their house anymore.

Seattle is a rainy area to live in and when the rain started, the cat started huddling near our garage. We opened the garage door to let him in but he wouldn’t stay. I assume he felt trapped once he was inside. We agreed that something had to be done but we couldn’t take someone else’s cat to a shelter, and we were aware that the cat neglect couldn't continue but we were also aware that we already had 5 cats living inside our house. 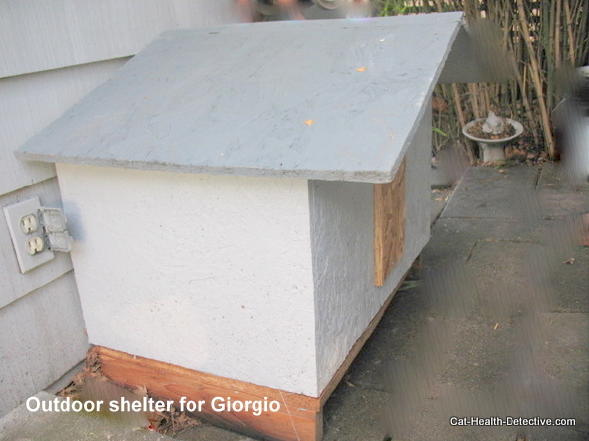 As a temporary solution my husband built Giorgio a small house that sat outside our backdoor where we could see it. We equipped it with a bed and a heat pad under the blanket in the bed…to keep the chill off. My husband had put a heavy see-through plastic door for him to push with his head so he could enter.

The intent of the plastic door was to keep the rain out when the wind was blowing. Giorgio is a smart cat and he was shown once how to get in and out of the small house, after that he was frequently seen sleeping in there with his heat pad keeping him warm and the plastic door flap holding back the rain. The roof also had an overhang to help eliminate rain splatter. September and October that little house saw a lot of use but in late November we knew it was time for a permanent solution.

I went to the condo to talk to the woman who owned Giorgio (they called him Cloudy). I told her how we had been caring for him, feeding him and giving him affection. I asked her if she had any objection to us taking her cat and giving him a good home. She was indifferent to his plight.

She said he could take care of himself but if we wanted to take him we were welcome to have him. This is what I mean when I refer to cat neglect. They were never outright mean to him, didn’t hit him or abuse him, but the cat neglect came into play when there was no responsibility felt to feed him or provide him with shelter.

He was not neutered so I called our veterinarian to make arrangements get him fixed and to start the vaccine protocols. A former victim of cat neglect, Giorgio has now gained weight and looks normal. My vet guessed his age at between 2 and 3 years old, so he is not only the largest cat in our household but also the youngest.

Giorgio enjoyed his first Christmas in a household that cares for him and lavishes attention on him but the next stage is to get the current “feline five” to accept him. He and Max have sparred a bit…so it’s now a process of taking the slow road to get him integrated.

He’d experienced cat neglect so he’s on his best behavior to earn his spot…he’ll no doubt win the others over…but slowly. His size makes them feel like their current pecking order is in jeopardy. How quickly they forget that at one time they were needy and had to work at being accepted.

We have bought Giorgio a harness so we can have him on a leash when he has his daily visits with the other cats. This keeps him from bounding towards them causing hissing and spitting. Because he is so young they interpret his movement towards them as an aggressive action when he’s just happy to have companions.

They can approach cautiously and although it takes time they will slowly get used to him. In the meantime, he has a comfy bed, litter and food along with window access to watch squirrels from our guest area downstairs. 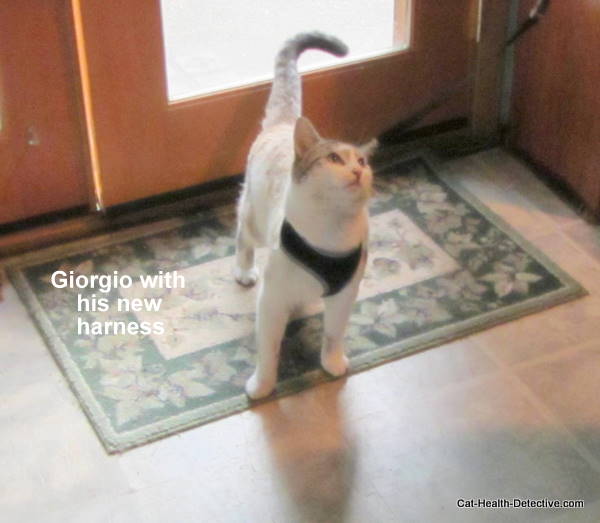 The moral of this story is try to take action when you see cat neglect. Taking a neglected cat to a shelter, talking to his owners or just giving him a few meals, affection and a shelter are options when you can’t add another feline to your menagerie.