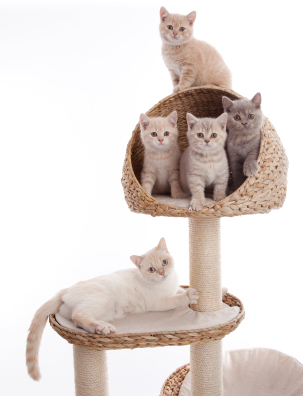 Cat hoarders are a serious problem and you see it on the news all the time. It isn't the multiple well-cared for cats like you see in the photo above! The typical “cat lady” shown in countless movies and TV ads is shown as a sweet but lonely old woman who shares her home with a menagerie of cats. The cats vie for space on every available surface. They run along kitchen counters, cluster on the sofa and sprawl en masses atop the a dresser or refrigerator.

This scenario may look cute and the cat hoarders may be seen as a harmless eccentrics, but there’s a dark side to this situation. People often own numerous cats and take excellent care of them with no problem. Cat people like me, with my 6 cats, are not the topic of this story.

Multiple cat ownership becomes a real concern when the number of cats overwhelms the owner’s ability to provide them with adequate care. I can attest to the fact that it’s not inexpensive because you have the vet care, nutrition needs, litter supplies…and the toys!

Authorities called in to investigate neighborhood complaints of noise or stenches coming from a particular residence have discovered shocking situations where overcrowded animals are confined in squalid conditions. It’s not uncommon for cat hoarders to have dozens or even hundreds of cats, often both living and dead, confined in apartments, trailers, cars and houses.

Sanitary conditions are often deteriorated to the extent that dwelling must be condemned by public health authorities as unfit for human habitation. Grequently, many of the resued animals are in such poor health that euthanasia is the only option.

The phenomenon of cat hoarders is an increasing concern to humane societies, animal control agencies, and veterinarians. It is an under-recognized, but frequently occurring syndrome. While it’s estimated that several thousand such cases happen in the USA annually, because of the hidden or secret nature of the phenomenon, the numbers are suspected to be much higher.

Studies that were done summarized the data and the conclusions were that 75% of cat hoarders were female and almost half were aged 60 or older. About half of those cat hoarders lived in single person households. The most frequently involved animals were cats, accounting for 65%. The average number of animals was 39 but there were cases with more than a hundred. In 80% of the cases studied, cats were reported to be found dead or in poor condition.

Unfortunately there’s no formal recognition of the syndrome and no systematic report of cases, which tend to fall within multiple government jurisdictions (such as public health, animal control, mental health, etc.). However, anecdotal reports from animal control agencies and humane societies suggest that cat hoarding occurs in most U.S. communities.

Most of the public is not aware that this is a real problem until they read in the newspaper or online about a case nearby. The cats are very poorly socialized. Many are born inside the house and haven’t been exposed to other people or environments.

Because of the sheer number, often the cat hoarders don’t handle individual cats very much, so the cats become almost feral. This means that even when the cats are removed from this kind of situation; it’s not always an option to put these cats up for adoption because they aren’t socialized.

Plus, cats kept in such conditions will often become so ill and depressed they stop grooming themselves and eventually stop eating and drinking…assuming their owner is providing adequate food and water, which is often not the case. A typical scenario would involve numerous intact males and un-spayed females, sometimes kept apart in cages and crates, but often allowed to intermingle and breed unchecked.

Besides the emotional stress, the animals often endure physical ailments, ranging from fleas and ear mites to malnutrition and other serious medical conditions. Cats are very susceptible to viral upper respiratory diseases. In these cases of cat hoarding, the cats sometimes have fatal intectious diseases.

Some cat hoarders will take a select few animals to different veterinarians to hide the phenomenon, but often the animal is dying by then. It is also common for hoarders not to notice that a cat has crawled into a closet and died.

The psychology of cat collectors is still difficult to understand. It has been connected to a number of disorders such as obsessive compulsive disorder. Once there is better clinical insight there may be more effective preventions and interventions.

This is not an issue of pet keeping because the severe conditions noted in so many of the cases are beyond simple variations in attitudes about pet treatment. It is believed there are some underlying conditions that have nothing specific to do with animals. It many cases it is a human mental health issue.

Things are further complicated by the way the media depicts these cases with mixed messages when they come to light. Animal control officers and cruelty investigators may be portrayed as the caring rescuers, pulling animals from hell houses and assisting in getting emotional help for the out-of-control owner.

Or they may be shown as Gestapo agents, removing animals from a loving, albeit eccentric and lonely neighbor only to euthanize them. In many cases a mental health problem is not recognized and the only alternative is to prosecute cat hoarders for cruelty to animals.

It may have started out innocently. A lady takes in a stray and cares for it. Then another and another until she is overwhelmed. But instead of recognizing she has a problem she just muddles along and as her mental capacities fail, the situation the animals are in deteriorates significantly.

The important thing is for you to recognize what a cat hoarder is:

What can you do to help prevent these tragedies? Here are a few suggestions:

So, be aware that this is happening and that some people are susceptible. Some hoarders actually place ads in the papers intentionally looking for animals to add to their collections. And, if you reach your limit of cats and a new one arrives at the door looking hungry, give it a meal and take it to the Humane Society or other reliable agency. We do this now at our household since we took in our sixth and final stray.