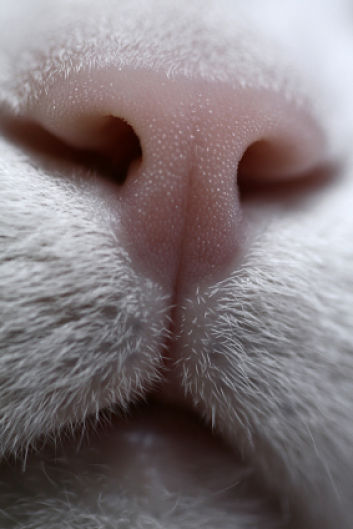 Olfaction …is the medical term for the sense of smell in a cat nose. It plays important roles in eating, friend or enemy recognition, elimination and sexual behavior. In cats, smell is a highly developed sense at birth. A newborn establishes a nipple preference on the nursing queen and uses smell to guide itself back to its chosen site. By 2 days of age, a kitten will react to offensive odors.

Until 3 weeks of age, when vision becomes a kitten’s main guide, it is the olfactory cues that help lead a wandering kitten back to its nest. During the weaning process, which occurs from 4 to 6 weeks of age, the kitten utilizes its sense of smell to find food and to distinguish between edible and inedible objects.

The cat nose is comprised of nares, which are the nostril openings; the nasal planum which is the nose’s external bridge; the nasal cavities; and the sinuses. These are the two nasal cavities, separated by a bone and cartilage structure called the nasal septum.

The respiratory system in cats is divided into upper and lower tracts. The upper respiratory tract moistens, warms and filters air. It begins with the cat nose, and also includes the sinuses, pharynx, larynx and trachea. The lower tract, which includes the bronchi and lungs, is where oxygenation of blood and carbon dioxide removal takes place. Lining the nasal cavities of the cat nose is a tissue called mucosaolfactory nerves to the brain’s olfactory bulb.

The olfactory areas in a cat’s nasal cavities are relatively larger than that of humans, but smaller than that of dogs, because dogs need a keener sense of smell for tracking behavior. Interestingly, a cat’s noseprint is a unique identifying feature, comparable to a human’s fingerprint.

The vomeronasal organ is responsible for pheromone communication between cats. Pheromones are chemical communicators….meaning one individual produces odors and another of the same species detects them. Canals in the mouth channel the pheromones to the paired vomeronasal organs in the hard palate. The organ’s olfactory cells transmit impulses to the accessory olfactory bulb, then to the hypothalamus, another region of the brain associated with sexual and social interaction.

Flehmen is the behavioral manifestation of active vomeronasal stimulation. A cat exhibiting Flehmen will raise its head, draw its lips back, wrinkle its cat nose and hold its mouth partially open. This behavior allows the odors to enter the oral canals and reach the vomeronasal organ.

Tomcats frequently exhibit this behavior, though many cat owners have probably witnessed it as well without knowing what it was. Situations such as being around a female cat in heat, smelling an unfamiliar cat’s urine, or smelling where another cat has rubbed and left its oily secretions could all initiate a cat’s nose Flehmen response. I have noticed my cat Coty perform this more than the others.


Social interaction between cats starts with the olfactory information exchanged when the cats first approach face-to-face, then face to anus. The cat will identify familiar cats, as well as greet non-hostile unfamiliar cats, in this manner. When a cat greets a human, the same behavior pattern can be observed. The cat approaches and smells the person, then turns and presents its hind end.

Urine and fecal odor buildup can be important factors in feline house-soiling. Because a cat can find even its own odors offensive, a dirty litter box may drive a cat to find another place to eliminate. In a multiple-cat household, multiple litter boxes are usually needed to prevent smells from discouraging litter box use.

The litter’s scent itself can affect litter box usage. To eliminate behavioral house-soiling, owners need to neutralize urine odors. Neutralizing odors may not stop the problem entirely but it certainly helps.

There are a lot of products on the market, even plain vinegar that can work. Avoid cleaners with ammonia because it will only intensify the odor. Odors that may be pleasant to humans…a solid lemon air freshener, for example…may actually be a good repellant for a cat nose.

The cat nose and sense of smell is crucial in cats’ feeding behaviors. Cats that cannot smell may not eat, and cats that are sick with upper respiratory infections or have congested nasal cavities often lose their appetites. When developing new products, pet food companies research appetite-stimulating odors along with tastes. These manufacturers know that when cats approach unfamiliar food, they will sniff it first; if they don’t like what they smell, they won’t even taste it.

Researchers have identified 14 chemicals that affect cat behavior when inhaled, the most notorious being catnip, an herb in the mint family. About 60% of cats possess the autosomal dominant gene responsible for catnip sensitivity. Though it’s considered a hallucinogenic, it is safe for cats. When given catnip, a cat may smell, lick, chew or eat it; some cats even like to roll or hold the catnip-containing item in their paws….all six of my cats do this.

The volatile oils in the leaves, which the cat smells, are released…sometimes arousing the cat to the point where it’ll leap into the air. Catnip’s effects can last anywhere from two minutes to 15 minutes. A cat’s response may depend on age and previous exposure. Stressed or fearful cats under the age of 8 weeks do not respond strongly to catnip.

Various medical problems can affect the cat nose. Common signs of rhinitis, a non-specific term describing nasal mucosa inflammation, include nasal drainage and sneezing. Sneezing is an involuntary reflex response to an irritant, such as sinus discharge or a foreign object in the nasal passages.

Nerve receptors in the nasal cavity and on the nasal turbinates trigger the sneeze reflex. Sneezing frequency and discharge characteristics can help determine a problem’s cause.

Clear, watery discharge indicates a mild problem, such as an allergy or weak viral infection; thick yellow to green discharge is more indicative of a bacterial infection. As an infection progresses, a nasal discharge can change from watery, to mucous to pus. Constant sneezing spasms offer clues that a foreign object may be lodged in the nasal cavities.

A bloody discharge may indicate long-term irritation, dried-out mucous membranes, trauma or even a tumor in the nasal passages. Owners may find it difficult to observe nasal discharge because some cats frequently lick their noses. Coughing signals a problem involving the lower respiratory tract.

The cat nose can snort up blades of grass or grass awns, which can then become trapped in their nasal passages. Violent sneezing may result, along with gagging, pawing at the nose, vomiting and difficulty breathing. Depending on where the material is trapped, a veterinarian may have to sedate the cat and examine its pharyngeal area.

Once the object is removed, the symptoms should disappear. Ocular discharge can be closely related to problems with a cat nose, since the nasolacrimal blockage would prevent proper tear drainage, which leads to a spillover on the face.

Facial asymmetry may signal nasal tumors or fungal granulomas in cats. To diagnose this condition, a veterinarian would have to take a biopsy of abnormal tissue. The most common tumor of the nose is squamous cell carcinoma a form of skin cancer that has a predilection for pink or white areas.

Initially, skin cancer on the nose might look like a scab that does not heal, but as it progresses, the tumor causes an erosion of the nares and nasal planum. Fortunately, if the tumor is caught early enough, it can be surgically removed.

Sinus disease in cats is uncommon, but if it develops, it’s usually a result of chronic infection and irritation of the nasal chambers. Medication does little to improve sinus drainage…decongestants that are effective in humans do little to promote drainage in cats, and nasal sprays and flushed have minimal effects.

Other noticeable clinical signs in cats with nasal problems include noisy breathing and sniffling, sounds that are produced by obstructed nasal passages and an overlong soft palate.

One type of obstructive condition is stenotic nares, a genetic condition affecting the narrow nasal openings found in flat-faced breeds, such as Persians, Himalayans and Burmese. Cartilage overlays the nares and obstructs airflow. A congenital condition seen occasionally, is cleft palate.

Owners usually discover this defect when they see milk in a newborn’s nostrils after it attempts to nurse. The hard palate doesn’t close, so the oral and nasal cavities are in direct communication. With a complete hard palate, the newborn is unable to create the oral vacuum needed to nurse effectively, thus it rapidly becomes malnourished.

It can also develop aspiration pneumonia if milk continues down the nasal passages and into the lungs. Repairing cleft palates is next to impossible in tiny newborn kittens.

The cat nose is also an indicator for kitty colds. Unlike sinus disease, upper respiratory infections (URI) such as kitty colds are prevalent. The most common causes are viruses, including the viruses that constitute the annual booster vaccines.

Often, a secondary bacterial infection will complicate the primary viral infection. Antibiotics which are used to treat upper respiratory infections in cats will work only if bacterial infection is present. Unfortunately, drugs that effectively kill these viruses do not exist, and veterinarians are only able to treat the symptoms.

Fluid injections can help cats that have high fevers or become dehydrated. A two-minute rectal temperature can properly assess a fever. To help a congested cat nose, owners might try hand feeding and removing discharges from the cat’s nose and eyes.

Using a vaporizer or humidifier in the room, or putting a congested cat in steamy bathroom can also help. URI’s can run a course of 7 to 21 days. 80% to 90% of cats that recover from these infections become lifelong carriers of the viruses.

In the carrier state, a cat can exhibit intermittent bouts of sneezing and nasal discharge. The discharge is usually clear, and the animal will eat, drink and act normally. Clinical signs associated with the chronic carrier state are due to the secondary bacterial infections that damage, sometime permanently, the nasal nucosa and nasolacrimal duct.