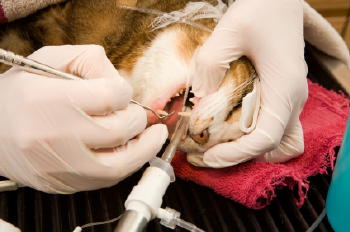 If your cat's gums and the mucous membranes around it's eyes are pale, it may be bleeding internally or suffering from anemia or a number of other systemic diseases. Call your vet immediately.

Some problems are genetic, inherited tendencies (both of my Himalayans had genetic gum problems), strength of the immune system, and the structure of the mouth help determine how much plaque and tartar develop.

The Importance of Diet

We've discussed the importance of cleaning cat teeth but another important preventative to cat teeth diseases is proper food choices. Feeding crunchy foods other than moist or semi-moist foods is better for the teeth but those moister foods should also be scheduled into the diet for other nutritional benefits that contribute to good health for other body organs.

While dry food can help to prevent tartar, it is not the only answer. Researchers are working to improve moister foods so they don't stick to the tooth as readily, hence allowing food particles to remain in the mouth and bacteria to grow. Plaque mineralizes and forms hard deposits called tartar...just like in humans, and the beginning of cat teeth diseases.

Healthy gums will be firm to the touch, closely attached to the teeth, and pink in un-pigmented areas. Many cats will have black spots on their gums, sometimes in large numbers...these are normal. What is not normal are inflamed, reddened gums, known as gingivitis.

Symptoms of periodontal disease, one of the worst cat teeth diseases include brown debris on teeth, red swollen gums that easily bleed, loose teeth, receding gums, and a cat who is reluctant to eat. A cervical cavity or neck lesion is another form of this disease. Researchers have a number of theories as to what causes this unique tooth decay. They range from diet to immune disorder to virus and to the environment.

What happens is decay forms between the root and crown at the neck of the tooth, where the gum line begins. The cavities eat away at the inside of the tooth and leave it hollow. They are hard to find because they're often hidden beneath swollen gum tissue. X-rays are usually needed for detection.

Periodontal disease is irreversible and may require advanced therapy to prevent progression of the disease. Chewing pumps infection into the cat's bloodstream, an infection can quickly turn into much more. The potential exists for damage in the lungs, heart, liver, and kidneys. The damage can either cause sudden disease or a slow, worsening deterioration that shortens the life of your cat.

Just 10 minutes of cat health care (cleaning it's teeth weekly and feeding a crunchy diet (only supplemented with wet food) can make a big difference in fending off cat teeth diseases.