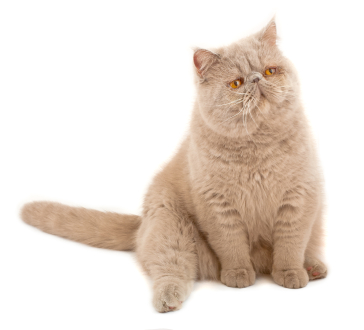 The round-faced Exotic Shorthair cat is similar to the Persian when it comes to temperament. Another of the cat breeds with an easy-going personality...and not too active although they are a bit more active than Persians. They adapt well as apartment dwellers.

Exotics are calm, affectionate and good-natured like the Persians and they do tend to have a higher activity level. Some Exotics may carry a copy of the recessive longhair gene and any offspring with longhair are classifed as Persians.

The Exotic cat is a Persian hybrid that is bred to look like a Persian cat, with one important variation; instead of having a long, flowing coat, the Exotic's coat is short, plush, dense and much easier to care for. It has the nickname, the "lazy-person's Persian." Early breeding was done between Persians and domestic short-hairs. At one point, Burmese and Russian Blues (two other short-haired cat breeds) were used, but no longer.

The Exotic is shown and judged in the longhair classes because its conformation is to be exactly that of the Persian. It is a medium-to large size cat with a heavy skeletal structure. The body is low to the ground with a broad chest and massive shoulders. The show quality example is, like the Persian, expected to give a rounded, softened impression.

Another of the cat breeds where the head should be massive and broad and very round. The neck is short and thick.  Large, round, expressive eyes that are well spaced, a short, broad snub nose, and a sweet open expression should also be present. The ears, short and round tipped, are positioned far apart so that the sense of roundness is maintained.

The paws are short, straight and large as well as rounded.  The tail is short, thick with a rounded tip.  The coat is one of the breed's most important features and should be short, dense and "full of life".  The coat, although shorthaired, is slightly longer that that of other shorthaired breeds.

The Exotic Shorthair cat is more animated than its Persian cousin. It is affectionate, easy to groom and easy to get along with. They can be playful, tend to be curious, but they don't like to be left alone.

Some owners leave soft music or a radio on for them while they are absent to help make their cat feel less abandoned. While the Exotic makes a nice lap cat, it also enjoys the sport of the chase.