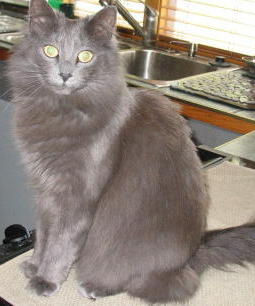 The Norwegian Forest Cat is one of the breeds of domestic cats native to Northern Europe. It is adapted to a very cold climate. It has a top coat of long, water-shedding hairs and a wool-like undercoat for insulation.

It is believed that the breed's ancestors may have been short-haired cats brought to Norway by the Vikings and may also have a heritage including the Siberian and Turkish Angora.

The first NFC Club was formed in 1938. The club's movement to preserve the breed was interrupted by World War II and due to cross-breeding with outside domestic cats during the war, the breed became nearly extinct.  The NFC Club helped the cat breeds by creating an official breeding program.

It was not registered as a breed with the European Federation Internationale Feline until the 1970's and then Sweden in 1978. Britain recognized it in 1989 but it was not recognized by the American Cat Fanciers Association until 1994. The NFC is very popular in Norway, Sweden, and France, where it has become the fifth most popular of cat breeds since 2003.

It is believed that the origins of the NFC are rather romanticized. It took natural selection, survival of fittest, to overcome Norway's cold weather. Its ancestors may include shorthair cats brought to Norway from Great Britain sometime after 1000 AD by the Vikings.

It is believed the Vikings had the ancestors of the NFC serving as mousers on Viking ships. Another source of ancestry is thought to be of the longhaired cat breeds brought to Norway by the Crusaders.

These longhaired and shorthaired cat breeds would reproduce with farm and feral stock and would eventually evolve into the modern-day Norwegian Forest Cat. Throw into the mix the Siberian and Turkish Angora, longhaired cats from Russia and Turkey......and the possible ancestors of the breed are extremely intriguing.

Norse legends refer to the Skogkatt as a "mountain dwelling fairy cat with an ability to climb sheer rock faces that other cats could not manage". Since the NFC is the most adept climber, there are those that believe the Skogkatt could be the Norwegian Forest Cat.

The Norwegian Forest Cat is well built and is similar in size to the Maine Coon. The breed has a long, sturdy body, long legs, and a bushy and full tail. The coat has a water-repellant top coat and a woolly undercoat, and is thickest at the legs, chest, and head. The profile of the breed is generally straight. The head is long, with an over-all shape similar to an equilateral triangle, a strong chin, and a muzzle of medium length; a square or rounded head is considered to be a defect.

The eyes are almond shaped and oblique, and may be of any color. The ears are large, wide at the base, high set, have a tufted top, are placed in the extension of the triangle formed by the head, and end with a tuft of hair like the ears of the lynx. All coat colors are accepted except chocolate and lilac and dilutions fawn and cinnamon. Since the cats have very strong claws, they are very good climbers, and can even climb rocks.

The NFC has a quiet voice but can be talkative. It is good with people, friendly and intelligent, but it has a high amount of energy and can be very demanding of attention. If outdoors, they can be swift and effective hunters.

This example of a feline breed adapts well to indoor life but their voices will get louder if there is a dog in the house. They are tall and often require more food than most other domestic breeds. Males are considerably heavier and larger-boned than females. They live to be 14-16 years old.