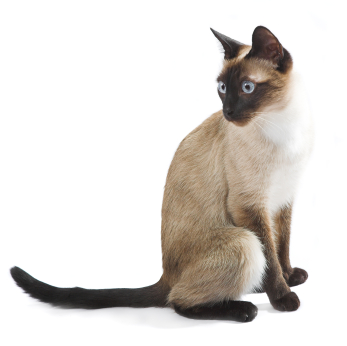 Of the cat breeds, the Siamese cat is famous for its active and vocal personality, as well as its intelligence. Siamese cats demand a lot of their owners' attention, and in general, enjoy being an only cat. Multi-cat owners will attest to the fact that Siamese want the owner to focus on them and not other housemates.

The breed originated in Thailand (formerly known as Siam) and it has been reported that the breed was first spotted outside Asia in 1884 when a British Consul-General in Bangkok, Edward Gould, brought a breeding pair back to Britain.

Color can also be a factor in Siamese personality according to some breeders. Seal Points tend to be quite outgoing with owners and with guests in the home. Blue Points are very person-oriented...kind to others but "connected" with one person. Chocolate Points are somewhat distanced from other cats but highly affectionate with their people while Lilac Points go through life with rose-colored glasses on.

The Siamese is the most widely recognized of cat breeds that are pedigreed. But many do not realize that a cat they think is a Siamese may indeed be a mixed breed or an entirely different breed. This is because the gene that causes the Himalayan or Siamese pattern is widespread in the domesticated gene pool. The Siamese gene is in the albino series. (see our Giorgio below)

This gene's nature is to cause color and pattern to migrate to the periphery of the cat's body, that is, to "the points." The Siamese gene has been shown to cause any color and any pattern to establish at the points, but the only colors the CFA recognizes for registration and competition are the chocolate, seal, blue and lilac points.  Kittens are born pure cream or white and develop visible points in the first few months.  By 4 weeks old the points can be recognized so you know which color they are.

By the 1950's and 1960's cat show judges began to show favor toward the more slender, elongated faces and breeders went along.  By the mid-1980's the original style had disappeared from the cat shows so today there are two types of Siamese.  The modern "show-style" elongated face Siamese and the "traditional" Siamese which is broader faced.

The traditional breed was saved from extinction by breeders mainly from the U.K. and then joined by others who continued to breed and register the older style.  Due to disagreements in different breeder's organizations there are a number of names used such as "Traditional", "Old Style" "Classic" and "Appleheads" (derogatory nickname given by modern "slender wedge face" breeders for cats that had rounder faces).

The Siamese is bred to have a long, lithe, well-muscled body. The head is expected to be long and triangular with beautiful, deep blue, almond-shaped eyes. The tail should be long and tapering, and the skeletal structure should be refined.

The contrast between the point color and the body color should be marked. The ears are expected to be quite large and should continue the long, flat lines that outline the shape of the head. They are sweet and affectionate and enjoy "chatting" with their owners.

Breeds derived from the Siamese Cat: